As my regular readers will recall, my mother died, a short while ago. We (I and my sister, brothers, sister and brother-in-law) have been very busy in the intervening time, so much to do, so many people to contact, official forms to fill, appointments.
But on that night, shocked by what had just occurred, my brother and I left the hospital in the early hours, going to bed seemed.... inappropriate, so we walked, walked, and walked in the dark. It seemed a good time to go visit Dad's grave. The churchyard was locked. low walls though. I'm not sure which one of us said "Let's split up and go through the graveyard", but it's a good line, usually spoken in horror movies just before the flashlight batteries fail. In our case there was no flashlight anyway.
The old man had nothing to say. He did not materialise and say  "Why aren't you boys in bed?"  (On the night he died we walked too, until dawn).
Anyway, I took a pic of the church and the moon.
But I tried to post it and it was a tiny white spot in a black rectangle. My night vision must be better than the computer's. 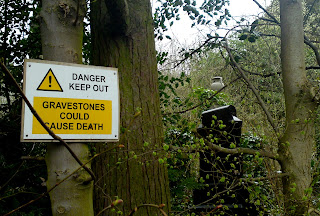 I think the reasoning in the picture above is a little flawed. The graveyard in question is officially closed. Nobody maintains it any more. Monuments topple, history fades. But there are several generations of my forebears in there. None, so far as I know, was killed by a gravestone.
Posted by soubriquet at 5:13 pm 5 comments: