Peter Green: Man of the World

(Updated edit: if you came by earlier, you might have noticed the first piece of music was missing. Oops. I blame it on posting too long after bedtime.)

I'm in a bluesy sort of mood, been listening to old blues, Peter Green and Danny Kirwan...
Peter Green  founded Fleetwood Mac. He wanted to start his own band , and recruited Mick Fleetwood and John MacVie, who he'd come to know when he took over Eric Clapton's place in John Mayall's Bluesbreakers.

However, this song was almost his last before he left his own band, which later became something else altogether.
The Fleetwood Mac of "Albatross" is Peter Green's, the Fleetwood Mac of "Rumours" is altogether a different creature. Peter Green, unfortunately, was shipwrecked by LSD, he became unreliable, disappeared for days at a time, tried to give all the band's money away, and at the height of his success, left the band, and music altogether.
Recently, he's returned. He doesn't want to be a star, but he still loves the music.


Posted by soubriquet at 6:00 pm No comments: 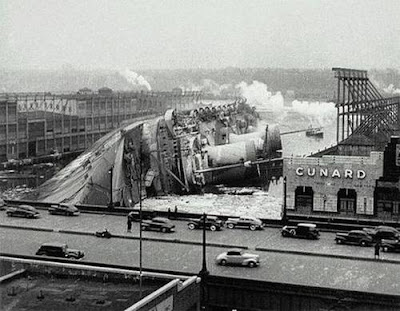 The ship in question, back in 1942, was the atlantic liner, SS Normandie, or by then, USS AP-53 Lafayette. When the war started, Normandie was docked in New York.  Her owners were scared of the german navy, so they just tied her up and transferred their passengers to the SS Aquitania, of the British Cunard Line, whose liners continued sailing.
Eventually, when America entered the war, she was requisitioned by the U.S Navy, and work commenced to turn her from being a luxurious ocean liner to a humble troopship.  It's generally agreed that a worker with a gas cutting torch failed to use an asbestos safety curtain, and fire broke out. 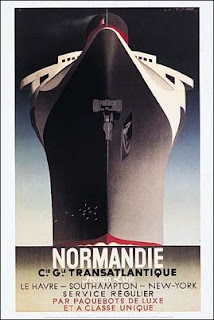 Amidst arguments about who was in charge of fire-fighting, the fire got out of control. The ship's designer told the authorities that by opening the sea-cocks he could sink her safely upright onto the mud below, but he was ignored by the 'experts'.
As a result, the watertight bulkheads were sealed, thousands of tons of firefighting water were pumped into the upper decks, and the inevitable happened. The fastest steam-turbine-electric ship ever built rolled over into the icy dock.
By the time she was righted, she was only scrap-metal, too expensive to refit.