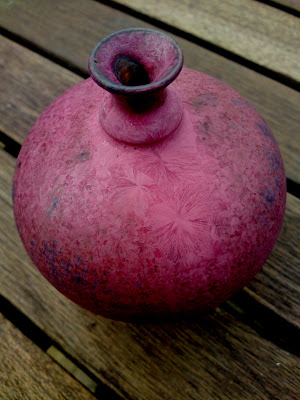 Well, I finally got around to a glaze firing. As they say, "every picture tells a story" , this one only tells part of one. The glaze is an old friend, Emmanuel Cooper gave the recipe in Ceramic review a zillion years ago.... I've mutated it a bit, as you do. It behaves differently on different bodies. where it's thin, you get blue, thick, you get pink. Very thick you get crystals. And it's prone to running, if applied thick enough to get pink. Which is why you can't see the bottom. yep;- chisel time on the shelf.
The rest of the firing was somewhat disappointing.
I need a beer. Or several.
As I've said before, I've always had a healthy suspicion of ready-mixed glazes. I like to be the alchemist, mixing ground-up rocks, I like to know what's in it, how it will behave, I like to think I can tweak it for better fit, surface, or whatever. Yes, I know that it's a somewhat imaginary stance to take, but it makes me feel as if I'm part of the process, not just a bystander.
All those little  tubs of expensive mystery-mix... pastel powders mixed with water... They all seem to have a fairly high clay content, because they stay suspended quite well, but also stay goopy to the touch longer than I'd like. I mean, I'm holding a bowl with two fingers outstretched across the footring. And that vice-like glazer's grip I once had is out of practice, so, I want to flip the bowl upright and onto a board, but it's still shiny-wet, and I fear the goop will slide if I flip.... so I'm holding, fingers tremoring... and it's a race between absorbtion and fatigue.
It's okay. I won that battle. But the end results were far from what I'd hoped for, cone 9 was down, out for the count, the glazes should have been mature, but in fact, were mostly not. Fairly even, top to bottom, I'd say, so the kiln's okay-ish, but I'm refiring right now. with a longer soak. The polygonal toploader is a new experience for me, with thinner walls than kilns I've used before, and it may be that the temperature drop-off is quicker, and I may have to do a power-controlled drop from top to, say, 1100C.
I want my wood-kiln back!
I'll learn. Out of all those glazes, there are a couple that I can tolerate.  I also made a stupid error, when there was a lot of steam, (I'd also put a group of freshly glazed pots in with the refires) I sought to hold the kiln a while, messed with the program. Sprang out of bed at five a.m. to go see what should have been an almost peaking firing, and discovered that I'd inadvertently told it to hold at 150 degrees c all night.
So I set it going again, and it won't be cool enough to look at until tomorrow, and I'll be at work, so I'll be crippled with suspense until six p.m., a whole twenty-for hours away.
Of course, if my run of errors holds, I'll find everything has run and stuck to the shelves.
Gnaaah!
More pics will follow, probably.
Oh: P.S. Although the firing wasn't as I'd hoped, some of the contents have already been exported, and have been, I've just been informed, enthusiastically received on the far side of the atlantic.
Posted by soubriquet at 12:27 pm 7 comments: