Posted by soubriquet at 7:31 pm No comments: An update is necessary.
I have been accused of Photoshoppage.
So, I'd better explain. First, thanks Red Dirt Girl and Rod, for believing me capable of such a feat, truth is my photoshop skills are non-existent.
"Twelve years and counting —On January 10, 1992, 28,800 turtles, ducks, beavers and frogs packed in a cargo container — called Floatees by the manufacturer — splashed into the mid-Pacific, where the 45th parallel intersects the International Date Line (44.7°N, 178.1°E). During August- September, 1992, after 2,200 miles adrift, hundreds beached near Sitka, Alaska. Twelve years later, in 2004, beachcombers were still finding the bath-time critters."
Now it's fifteen years... The first ducks to cross the atlantic are drifting towards Europe, expected to hit the beaches of Cornwall, and Normandy any time now. Dr Curtis Ebbermayer has been tracking them, and other drifting cargoes, which have become an unexpected tool in tracking ocean currents. ""It's amazing what a duck can teach you," Ebbesmeyer says. "There was one container load of turtles, ducks, beavers and frogs, twenty-nine thousand in a single container that went overboard in the middle of the Pacific," he says.

The small, plastic adventurers were accidentally dumped into the ocean in January 1992. Pushed by winds and currents the ducks were carried to Alaska where thousands washed ashore. But hundreds more would have been swept up thru Bering Straight and so far north they would be frozen in the Arctic icepack. Moving slowly with the ice across the Pole, Ebbesmeyer predicted the frozen flotilla would take five or six years to reach the North Atlantic and thaw."
Here's a link to a website.
It's worth noting the manufacturers offer a reward for each drift-duck returned with details of its capture position and date.
However, they are worth much bigger money on ebay. Allegedly $1,000!
I'd like to claim the giant one in my blog was a mutant ocean wanderer. But if I'm honest, I'll confess it is part of an art installation on the Loire Estuary, in France. The artist's site is HERE. 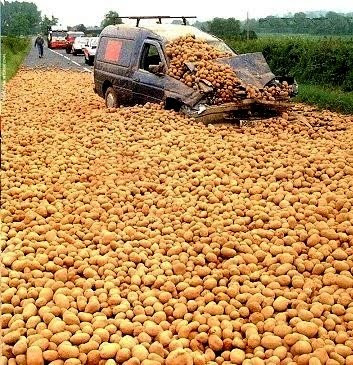 (I had a pic of a truckload of spilled apples here, but somehow I lost it. These are potatoes, pretend they're apples, okay?)

Cider!!!!
The picture made me think of another fruity incident:- Harry Chapin, long ago, sang a song about a crash in Scranton, Pennsylvania. On his Album, Verities and Balderdash.

On March 18, 1965, on Moosic Street in Scranton, a tractor-trailer carrying 15 tons of bananas lost control in rush hour traffic, hitting cars, houses, and wire poles before crashing into a home. The driver, Eugene P. Sesky (35), was killed and over 15 people were injured.

He passed a sign that he should have seen,
saying shift to low gear, a fifty dollar fine my friend.
He was thinking perhaps about the warm-breathed woman
who was waiting at the journey's end.
He started down the two mile drop,
the curving road that wound from the top of the hill.
He was pushing on through the shortening miles that ran down to the depot.
Just a few more miles to go,
then he'd go home and have her ease his long, cramped day away.
and the smell of thirty thousand pounds of bananas.
Yes the smell of thirty thousand pounds of bananas.

He was picking speed as the city spread its twinkling lights below him.
But he paid no heed as the shivering thoughts of the nights
delights went through him.
His foot nudged the brakes to slow him down.
But the pedal floored easy without a sound.
He said Christ!
It was funny how he had named the only man who could save him now.
He was trapped inside a dead-end hellslide,
riding on his fear-hunched back
was every one of those yellow green
I'm telling you thirty thousand pounds of bananas.
Yes, there were thirty thousand pounds of bananas.


A woman walks into her room where her child lies sleeping,
and when she sees his eyes are closed,
she sits there, silently weeping,
and though she lives in Scranton, Pennsylvania
She never ever eats ... Bananas
Not one of thirty thousand pounds .... of bananas

Stop Press:
Having looked into this further.
Harry Chapin wrote this song less than ten years after the man died. There was a widow and children.
After being criticised for the song, Chapin said he would donate the proceeds from the record to the widow and children. They never got a penny.

I found a comment elsewhere:-
"As a native of Scranton's South side, I remember the day, and the man in the truck. His name was Gene Seski. Gene loved playing guitar and keeping an eye on neighbors kids. I know he watched me, and my brothers, a few times for my parents. He would also walk across the parking lot in the snow in Hilltop Manor barefoot. He was my inspiration to become a truckdriver, which I am still today after 20 years."

If you hear that song again, spare a thought for Gene Seski, a man who played guitar, looked after neighbours' kids, walked barefoot in the snow, a father, a husband, a real person, who was killed by a brake failure, never got to see his children grow up, his grandchildren too.
It's too easy just to hear the song and let it run by as a thing of fun, of comedy. Why are bananas funny?
This song isn't a funny song about a lot of bananas. When you look a little more closely, it's about a man dying.