So, Have You Had Any Snow in Britain Yet? 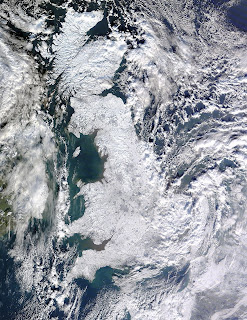 Thank you, NASA, if you look in about the centre of the image, you'll see me shovelling snow.

I posted this once long ago, now Boing-Boing's reposted it and reminded me of how the Ross Sisters outshine any TV talent show competitors of the present day.
Their one and only remembered performance now is this, from the movie Broadway Rhythm, of 1944. I'd post a picture of them arriving in London to appear in a show called Piccadilly Hayride, but the Getty Picture Library would sue me for licensing fees, pretty rich for an image 56 years old, that's probably not been called on in fifty years. Dixie, the youngest of the sisters, married british singer/comedian Dickie Henderson, I remember watching the Dickie Henderson Show, about a million years ago. Sadly, she died at the age of 34. 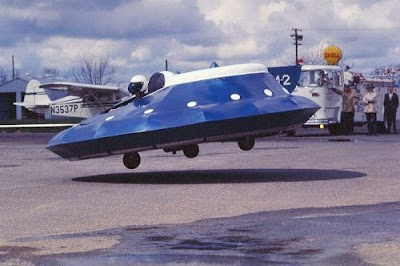 Dr Moller in 1967... Notice the altitude, and the somewhat iffy attitude control.

Moller Aircars, to be precise, I've been following their story, on and off, since the first glossy magazine articles of the seventies promised imminent production of flying cars at road-car prices. 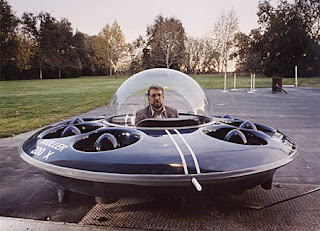 1989, this one flew a little better, looked great, a flying saucer for the masses. 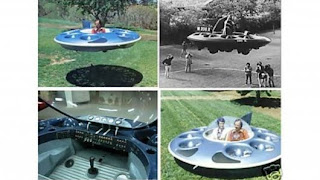 They tried to sell the prototype on ebay, in 2008, but nobody came remotely near the 3.5 million reserve price. 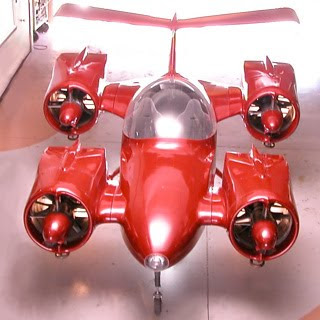 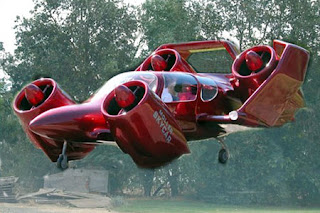 Ah! At last, the real thing.... or is it?
This one's supposed to fly even if two engines fail. Basic mechanics and seat of the pants physics suggest that that's somewhat unlikely, given that the centre of thrust is nowhere near the centre of gravity. Maybe diagonally opposite engines would be survivable. In dead calm. Ten feet up, Above something very forgiving, like a big haystack. Um, a big fireproof haystack.

"Please note, the Moller Skycar is currently only at the "concept" stage".
What's not said here is that the longest it's ever flown for is sixty seconds. That it's never  flown free, it's always attached to a crane. Sometimes, according to eye-witnesses, the crane performs the take-off, not the engines. Um. It flies without anyone in the cockpit. I wonder why?
Moller's publicity shots have often shown a smilling Dr Moller at the controls. However, there seems to be no evidence that this thing can fly with a human, untethered.

So, 45 years after he started, some 100 million dollars poured into the development, (some sources suggest it is closer to 200 million), we have a very pretty thing that flies for 45 seconds, travels ten yards, and lands badly.
In 2003, the Securities and Exchange Commission sued Moller for civil fraud (Securities And Exchange Commission v. Moller International, Inc., and Paul S. Moller, Defendants) in connection with the sale of unregistered stock, and for making unsubstantiated claims about the performance of the Skycar. Moller settled this lawsuit by agreeing to a permanent injunction and paying $50,000. In the words of the SEC complaint, "As of late 2002, MI's approximately 40 years' [sic] of development has resulted in a prototype Skycar capable of hovering about fifteen feet above the ground."

Doctor Moller filed for chapter 11 bankruptcy protection in may 2009 , as reported in the Sacramento Business Journal .
Still, it's not all bad. Somehow, whilst pouring a lifetime's work and a mountain of money into a futuristic machine that has NEVER demonstrated the abilities claimed for it, Dr Moller declares his private, not corporate, assets to be over 46 million dollars.
There do appear to be some spin-off technologies,  they say their muffler/spark arrestors are sought after worldwide, that their wankel rotary developments are world beating... Hm. Maybe I'd better tip out my piggy bank and invest.

It seems to me that most people trying to develop a new technology work first on the technical aspects, build it out of old bedframes and lego, until they've got an ugly, but demonstrably workable prototype. Whereas it sems Moller works from the other end. Draw a Jetsons-like flying car, tell people it will travel 500 miles at 350 miles per hour, rescue people from burning buildings, commute more easily than by car, sell them in advance, promising FAA certification very soon, and, year by year, fail to deliver one single shred of evidence that your (extremely noisy, and therefore certain to be banned in any residential setting)  device will do any of the things you claim. In the YouTube video, it's shown taking off, hovering, and landing (in a rather unconvincing, unlevel, thump), all whilst tethered to a safety crane.
I've been unable to locate anything to suggest this lovely glossy thing can actually take off and transition into stable forward flight at 60, 350, 500, or any miles per hour at all.
Animations on Moller's website? Ha.


If you go to Moller's own website, there's  only happiness, sweetness  and light.
in "What people are saying" it's all upbeat. No mention of the chapter 11 bankruptcy.
Posted by soubriquet at 4:21 pm 7 comments: 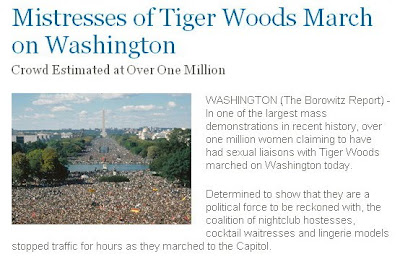 Posted by soubriquet at 3:11 pm No comments: