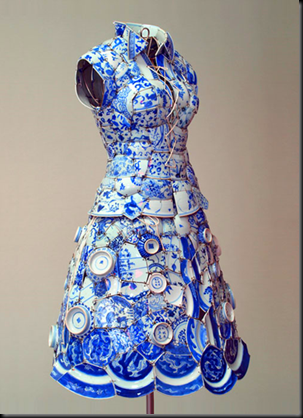 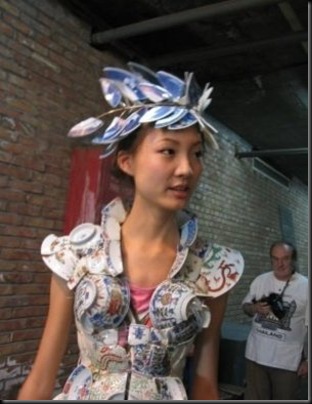 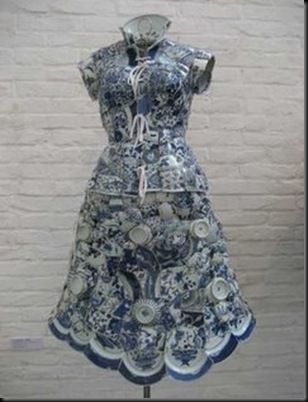 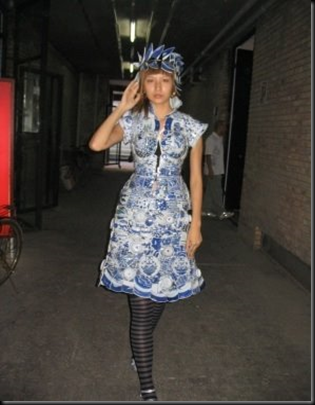 I just love this, part of a body of work by Li Xiaofeng.

As a potter, I'm fascinated by the many uses of ceramics, from the earliest times to the present day. The space shuttle is protected from the searing heat of re-entry by ceramics, main battle tanks have ceramic armour plates, I just bought a vegetable peeler with a ceramic blade, I've eaten my breakfast out of a 2,000 year old Roman Samian ware bowl, I've drunk beer out of a tankard last used in 1642. Egyptian tomb paintings show the god Thothmes creating a man on a potter's wheel, nearly seven thousand years ago.

Yet ceramics, despite their extraordinary longevity and endurance, also speak to us of fragility, preciousness, of great value, easily broken.

Li Xiaofeng uses shards of Qing era porcelain, (about A.D.1830), stitching them together to create these garments. I can only guess at the meanings she holds attached, the past creating a shell, a carapace for the future, thoughts of fragility and breaking, but also of timeless durability, -fragile, but can last thousands of years... And the dichotomy of broken, yet precious.

In China's history, mountains of broken porcelain have been created, but treasured pieces were often stitched back together, small holes drilled in fragments and precious metal wires used to hold them, cracks rebuilt, filled with gold-leaf lacquer.

I saw these first via a link that led to Le zèbre bleu. 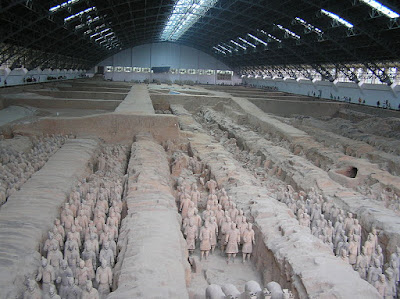 Here's a few made a little earlier, in China, about 210 b.c. -current estimates are that in the three pits containing the Terracotta Army there are over 8,000 soldiers, 130 chariots, 520 chariot-horses and 150 cavalry horses, the majority of which are still buried.

Argh! I'm just having a little html crisis. damn! I can't figure it out. never mind.