I Stop for Scrapyards 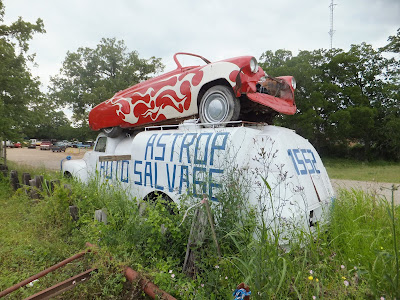 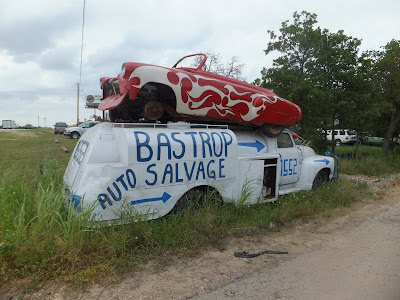 Posted by soubriquet at 4:13 pm No comments:

Rusty Junk? -or a link to the Bygone Past? 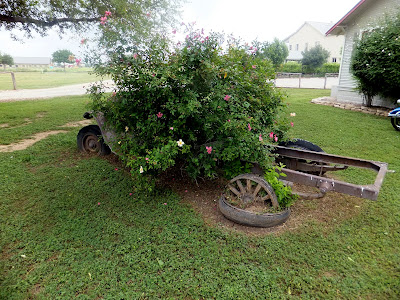 Though it looks a lost cause, actually most of the important stuff's still there. 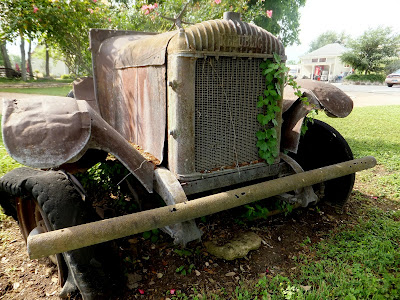 Imagine  the day when this arrived on the ranch, fresh from the factory, in Alma Michigan. 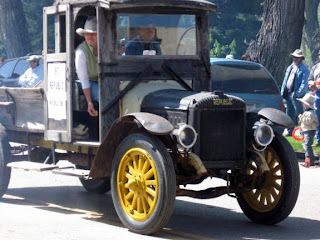 I stole this pic from BMW Dog, who has a neat photoset of historic vehicles in a parade in Montana.

Best I could find of a working Republic, in believable trim, as opposed to over-restored and shinier than ever was, even when it came out of the factory 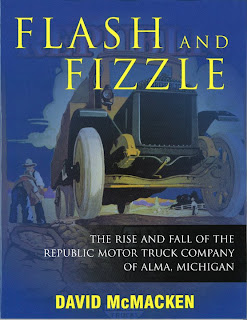 ""FLASH & FIZZLE" the latest title authored by David McMacken and published by the Alma Public Library, is available for purchase through the Library. The book chronicles the rise and fall of Alma's Republic Motor Truck Company. It is priced at $25.00. Mail orders are $30.00. Please make checks payable to the Alma Public Library." 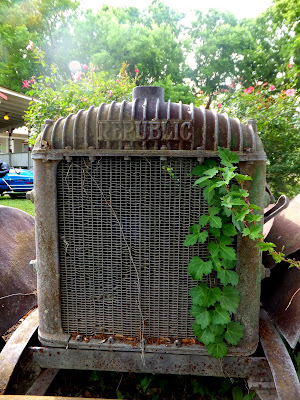 It's a Republic truck,  about 1918, later ones did not have the finned radiator casting. That's a toughly built thing, superior to many of its contemporaries. 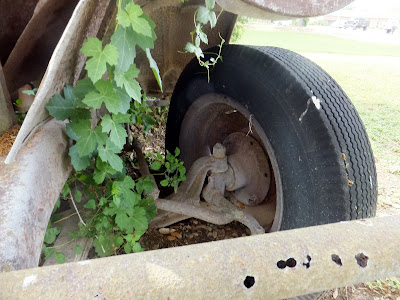 No brakes on the front wheels! (Normal for the era, but scary on a downhill!)

Originally it would have had wooden spoked front wheels and solid tyres, these are very much a later addition. But not surprising. It's the front wheels and tyres that take the biggest shocks and the greatest lateral loads 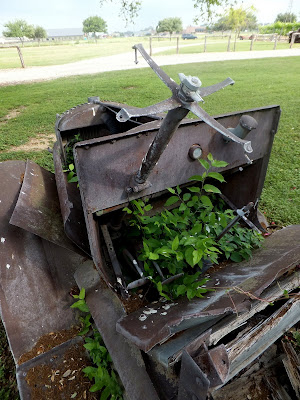 Steering wheel was wooden. Another scary thing, the fuel filler is up there on the right. Oh yes. the fuel tank sits right up there over your knees. Nice idea if you crash. Or if it develops a leak. However, not such a bad idea in its era. No need for a fuel pump, it just gravity-fed to the carburettor down on the right side of the engine-block. Instrumentation? what?
How fast? Well look at the road and you can see. Sheesh. Next thing you'll be wanting lights. 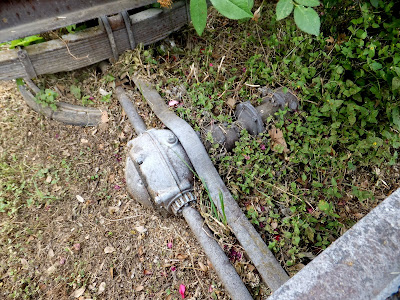 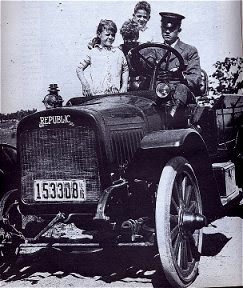 Here's one that belonged to writer Edgar Rice Burroughs. He and his family had it bodied with a western wagon/prairie-schooner type canvas top and travelled all over the U.S in it. 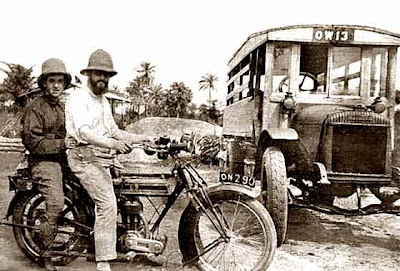 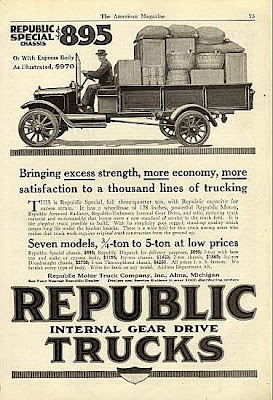 $895 bought you the bare metal chassis, no seat or body, $970 bought the body illustrated. Some buyers would take the chassis to a coachbuilder to get the body of their choice, delivery van, for instance.  Farmers probably bought the factory body, and maybe stake sides. The average wage in 1918? 875 dollars. Average price of a house? $4800.
Babe Ruth was on the astronomical salary of £7000!

"The war had created such an immense demand for basic necessities at home and for the Allies in Europe that the domestic supply chain could not keep up. The U.S. was providing Britain, France and Italy with everything from wheat and lard to coal and clothing. Prices soared. Inflation hammered the economy. Overall, 1918 registered the second-highest single-year inflation rate in U.S. history, at 17.26 percent. The only worse year was 1917, when inflation was 17.80. (The inflation rate in 2007, by way of comparison, was typical—2.85 percent—and even the severe inflation of 1980 was 13.58 percent). In fact, it was this problem that spurred the government to begin measuring inflation rates and cost-of-living indexes.
A report released in August 1918 showed that from August 1914 until June 1918, the cost of living in America rose 50-55 percent. Food prices rose 62 percent. Clothing was up 77 percent. The price for a pair of men’s overalls, the report stated, rose 161 percent. Working conditions were improving, but the buying power of average Americans was not." 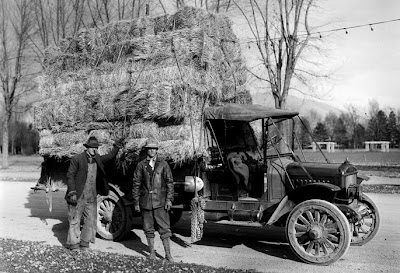 Here's one like  the rusty shell in its hay-day...
sigh. sorry about that. 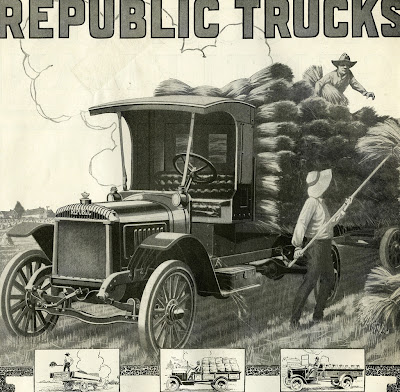 So, "Where is it?", you ask.
The Gruene Homestead Inn, Gruene, New Braunfels, Texas. 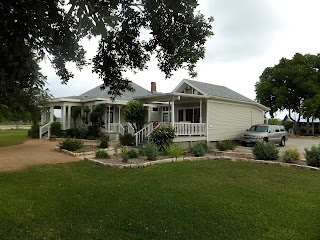 Our little cottage for the night. 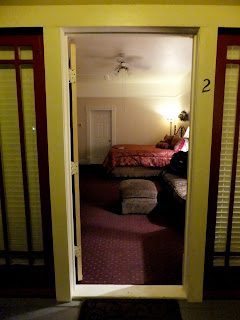 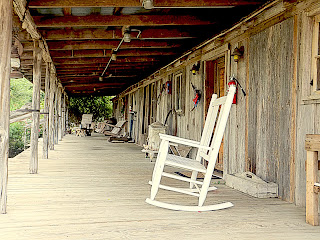 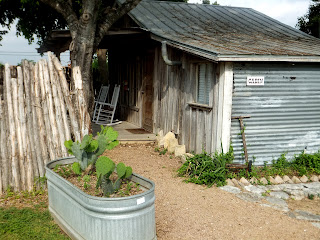 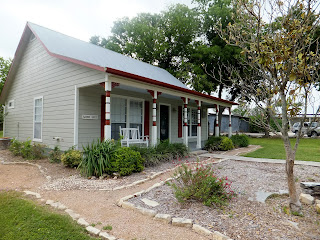 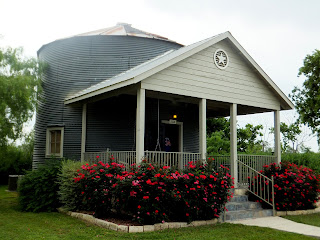 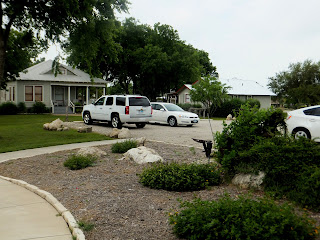 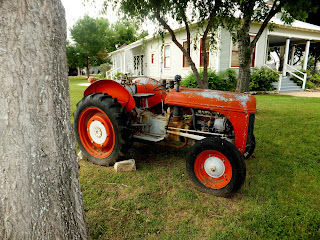 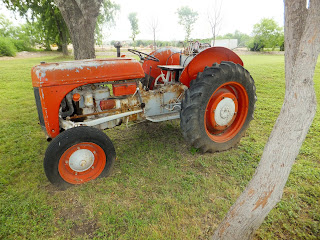 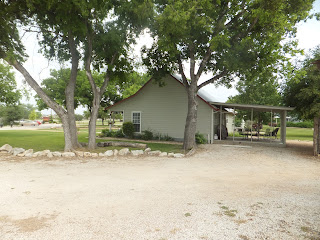 A good place to stay.

There's a live music bar and a swimming pool, and all that stuff too if you want it. We just sat out on the porch, in the swing seats and enjoyed the evening breeze, listening to distant train-whistles.


(Near San Antonio, the Alamo and all that. What? you forgot the Alamo? I bet Davy Crockett would have wanted a truck like this! )

Be patient. It takes me far longer than you can ever imagine to produce a blogpost. I'll bet you guys do it in minutes, with ease. I take forever, and get easily sidetracked. 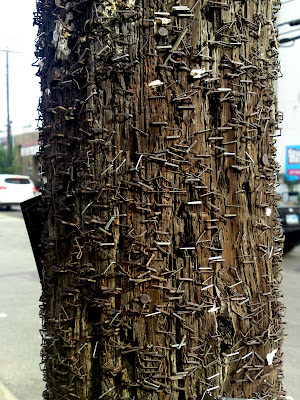 Just across from the University of Texas. Student-land, on-street advertising, I wonder how old the oldest staple or nail is?

Posted by soubriquet at 12:07 pm No comments: