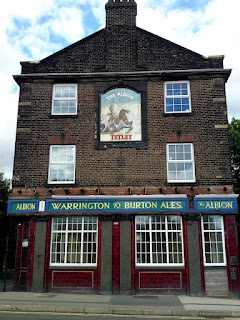 The Albion, on Armley Road, Leeds.

A few years back, it was a thriving pub with cosy rooms, tiled fireplaces with coal fires in winter, very traditional, dark varnished wood, stained-glass decorations and fine woodwork.
My brother and I would often drop in for a couple of pints, and a game or two of pool, maybe a plate of sandwiches, (the sandwiches, like the beer there, were excellent). A friendly place, the front bar was across the width of the pub, that was the place to lean on the bar, chat with the regulars, and the back rooms, on the left was a cosy sitting room, and on the right, the room with pool table, dart board etc. Old blokes playing dominoes. On the walls, pictures of local history, the big engineering works and railway yards that, like the pub, are just memories now.

"The building dates from the 1860s when it comprised of two shops, one originally a beerhouse which became the Fleece Inn in 1873, and the other which became the Albion Hotel around 1886. Both were later bought by Peter Walker & Sons. After the First World War the council began refusing to renew licences to uneconomic pubs and the Fleece and Albion were threatened, but were given a reprieve when they agreed to a merger instead. The name The Albion was chosen for the merged pub, which was sold to Tetley's in 1925."

As you can see in this picture, the old windows and doors were quite ornate.
Tetleys, in the 1970s declared it a 'Heritage Pub', a distinction they gave to pubs that had retained much of their original character, this designation was supposed to confer protection to the pub against the scourge of regular onslaughts of 'themed' interior decoration, which robbed so many of them of their character. A year or so back, I noticed it had closed its doors. The windows were boarded over, the sign fascias were ripped off. Recently, however, it's been sold. It looked for a while as if the demolition men were moving in, but it seems they stopped at just ripping out the interior, and those ornate windows. Oh. And the front door. In place of the fine woodwork, nondescript pvc framed windows, no more stained glass, but at least they didn't knock it down.
stop press: it's a grade 3 listed building, an application to demolish would probably have been rejected, on the grounds that it's a handsome piece of history. 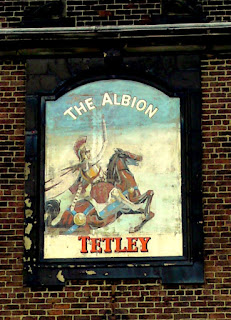 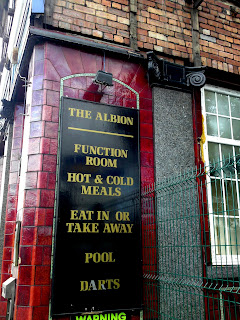 This sign will soon disappear. The old pub's about to become offices. 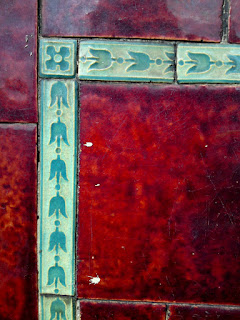 Beautiful red tiles, the colours and the inserted borders mark them as products of the  Burmantofts Pottery Works, from north-east Leeds. Across the road from the pub is the railway, and one of the more unusual claims to fame the pub might have is the fact that it appears on numerous model railway layouts! In the 1980s, a model railway accessory firm, called Superquick, sold a card model of the Albion, as a typical victorian town pub. If my internet connection had not just died, I could look to see if it's still available, and I could post this.
Ha. I can find plenty of references, but no examples. I also just learned that the Luftwaffe managed to damage the Albion during WWII. That's a surprise, as Leeds got off very lightly compared with many other industrial cities. The raid that damaged the Albion was probably aimed at the railway, or maybe a straggler from the raids on Kirkstall Forge, a couple of miles further up the Aire valley.


Stop Press! Ead-itter's  note: From the comments, I realise that 'Perfidious Albion' has crunkled many a brow, so I have to claritify my title. 'Albion' is one of the oldest known names for Britain. It goes back a couple of thousand years, when it was just a mysterious place on the map, a distant land on the edge of the world to greek and roman, carthaginian, phoenician alike.


Perfidy is treachery. I think it was a frenchman who coined the phrase Perfidious Albion, but I refuse to look it up. A pub called "The Albion" is thus quintessentially british, redolent of roast beef, Union Jacks, St George, Nelson's navy, british bulldogs.
This pub now not a pub? Perfidy!
Office workers where once flowed the foamy beer. I shudder at the thought. 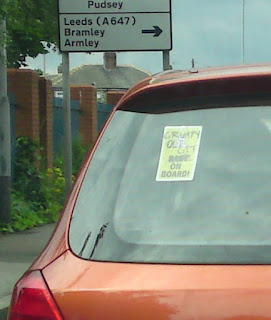