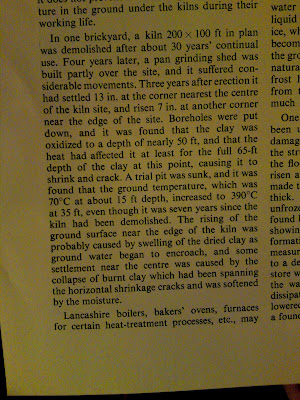 
To understand this, you really need to know a little about how brick kilns operate. I could bore you for hours on the subject of kilns, and at least a couple of those hours might be on the history of bricks. I realise that out there in the world there are people who don't know and don't care what a brick's made from, or how, or the differences beween clot-bricks and extruded or pressed one, kibbled vs.wire-cut...
The kiln in question would almost certainly have beem a Hoffman kiln. The Hoffman kiln operates a series of chambers, and fires constantly. As one chamber is firing,  its hot is passed through other chambers, preheating and drying the bricks, when it reaches temperature, the adjacent chamber's fires are lit, and air supplied to their fire passes through the just-fired chamber. The process was more efficient than the intermittent kilns previously used. Some Hoffmans fired for fifty years and more, continuously, hence the ground heating effect.