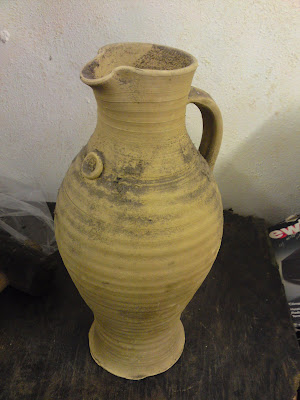 I think I can out-procrastinate most people. This pot, I made in about 1992?, I plan to fire it some day.

Builders had started on a new housing development a quarter of a mile away, the digger buckets were cutting into smooth yellow clay... I hooked my trailer up, went to visit, asked for a grab of that clay, and took it home. 24 hours later, I had this. I did fire some samples, this one escaped, it's in a store of largely forgotten stuff, long story.... which I'll miss out altogether.
It's a baluster jug, loosely based on mediaeval stuff, hence the unfinished foot. 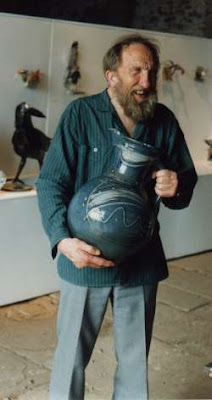 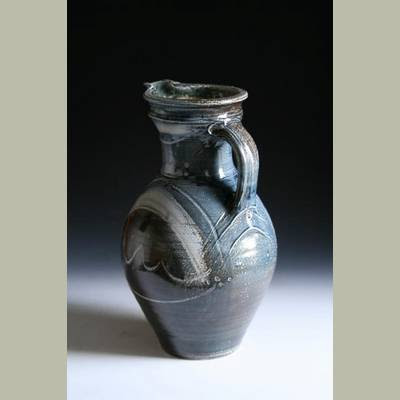 In 1976, the BBC made a series called "The Craft of the Potter", it was presented by the late Michael Casson, (1925-2003), a truly lovely man, a man so enthusiastic about his craft that it was impossible not to smile in his company, I had the good fortune to meet him several times, but never had the money, nor the good sense to buy one of his characteristic jugs.
The jug, or pitcher, in particular, what he called a "harvest jug" is the form which I think he most loved. Everything about him seemed larger than life, he'd make a jug with swift, sure movements, coat it with slip, and with a deft swipe of the thumb, a decoration would appear.
Mick always seemed to be wearing a smock, as loved by cornish fishermen, he always looked, to me, like a mediaeval character, the bearded character we'd see in the margin of some illuminated text, or the peasant potter carved in some cathedral.
Okay. I confess, I wanted a smock like that too, then I'd look like a "real" potter.
There was a book to go with the T.V. series, I have a copy, the series seems to no longer be available from the BBC, the last version I can see is on video cassettes, and the five 25 minute programs were available as part of the BBC's educational resources at the bargain price.... wait for it....... of £625:00. ($919:00) I'll bet they didn't exactly fly off the shelves! So far I've only found one fragment on youtube. Somebody out there must have it.

Ha! just noticed he says his wheelhead "batts" (circular discs on which the clay is thrown) are made of asbestos. It will be asbestos-cement, we had those at college too; funny how we are so paranoid these days about asbestos, yet in the seventies it was everywhere. If it really is as bad as we are told, then I'll definitely die of it, because in my school we used asbestos mats in the chemistry lab, asbestos mittens too, the pipes were lagged with asbestos insulation, my kiln had asbestos cloth under its wiring connectors..... It was everywhere, still is.
Posted by soubriquet at 4:35 pm 10 comments: