I Will NOT be Commenting

On whether the encyclopaedia is of the right thickness for its subject...
Posted by soubriquet at 5:39 pm 4 comments: 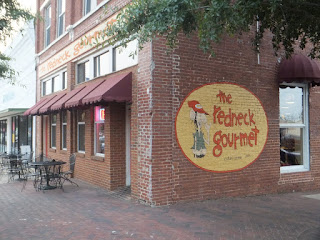 This being my first visit onto the Red Dirt Mule's turf, it was possible that it might be a bit nerve wracking for all concerned, as this trip involved meeting the mulettes and the parents. I was forewarned that the mulettes might be plotting various pranks in order to throw me off balance. Well, I've never been other than off-balance, so that wasn't too great a threat.
I confess, I'd played similar tricks on her. When she first met some of my friends, and they'd asked how we met, I could hardly, a red-blooded male who's at home with spanners, wrenches, power tools, greasy engines and so on, admit that it all started with us discussing poetry in her blog-comments. So I told them I'd met her through a "Befriend an Inmate" scheme, on the web via a Texas women's prison.
Believe me, some of my friends ARE that gullible. She was unfazed, offered to show them her ankle tracking-bracelet. It's one of the better things I've done, offering to sponsor her early release into the community.
Anyway... the kids, I think, were just curious to see this mystery guy in their mother's life. During week one, they were away with their dad, in california, so I had time to bribe the dogs onto my side. One of them anyway. He rapidly decided that as I wasn't frightened of him, and I fed him too, that I must be okay. The other one? well, she's kinda scared of all men, and growls whilst backing away. Apparently, I'm not so scary if I'm sitting down.
I need not have been troubled at all. She's not lying when she says she has good kids. They're all three of them intelligent, well-mannered, and likeable. I can't think of any moment when I felt any tension.
They all play scrabble. Well of course. and the ten year old is a scrabble shark. don't imagine for a moment that he needs concessions, because he's a master at getting multiple words in each play. Now his concept of dictionary skills might be questionable, but he's a tough guy to play.
Whilst RDG sighs with frustration at the inter-kid battles, what I see is three kids of different ages who all look out for each other. Yes, they'll squabble over the usual stuff, car seats, games etc, but they're solidly together against outside threats. I'd say they're kids any parent could be proud of.
In Georgia, whilst the rest of the house slept off the 14 hour trip, her dad asked if i wanted to come with him on a trip to the dump and the post office. This is man speak for "Get in, I want to find out who you are without the womenfolk interfering."
But hey! A trip to the dump! Cooool!
Yep. I'm a simple creature. A trip to the dump, a wander around a lumber yard, these are all pleasures for me. So I got grilled during a scenic drive around rural Georgia. I must have passed, because I got a beer at the end of it. Both parents plied me with questions, and it seems I'm welcome to return. The sister, who, I had been warned, was doubtful of my intentions, also gave me a pass mark.

That's it. It seems I've passed inspection on several fronts. Failed on only one, a brindled greyhound-cross bitch who thinks I'm the embodiment of scary.

As Arnie would say "I'll be back".

Here's a few thoughts from my recent trip to the U.S.  (Leeds U.K. to Houston Tx)
I flew from the U.K. via Amsterdam, whereas the lady i was going to see has always flown via Manchester. The Manchester route requires a train ride across the pennines, and it requires also a longish stopover in Atlanta. The trip to my local airport is far quicker, and the whole heading east to go west thing works out pretty well. I'd choose that route again. Amsterdam Schiphol is a pleasant terminal, it's got its own library reading area, and an in-airport branch of the Rijksmuseum, full of old master paintings!
My plan of having no checked baggage worked well. that and online check-ins, zowie, what a stress-saver. Being a man I can contemplate two weeks in a foreign country out of one carry-on.
In fact, I took a few totally unneccessary things, as I'd mistakenly thought I might want shirts and a fleece for cooler evenings.... Hahahahahahaaaaaaaa!
cooler evening? there's a joke. But I was prepared for them, and for rain. I now realise I could have left them out. T-shirt is plenty. The much grumbled about security checks? I can't complain. I preferred the old days, when you didn't have to empty all your pockets into a tray, take of your belt and shoes, and stand in a scanner, before also being frisked. But it wasn't a big deal.
Arriving at Houston, I got in the wrong line because I truly couldn't understand the guy's accent. The correct line I then went to was a horrendous zig-zag shuffle. Very few immigration checkpoints were actually manned.  It could have been handled better, and I was shuffling, zombie-like, for the best part of an hour. Once at the gate, it was polite and businesslike. There are tannoy warnings telling you not to grumble, cause a fuss or crack any jokes whatsoever, on pain of arrest, so I curbed my natural tendencies and tried to keep a stoic dead-pan expression.  I feared that if I so much as smiled at the man who took my fingerprints, scanned my retinas, peered at my face (+took bone marrow, urine, and blood samples... no. not really. but I wouldn't put it past 'em), I'd find myself being shuffled away to a concrete cell. In fact, he broke the ice, and smiled at me, wishing me a pleasant stay. Customs? I was waved through.
Eventually I exited the labyrinth, and was met.
Texas was quite warm. Like between 96 and 104 degrees f all the time. That's around 38 to 40c. I've been warmer, I've been lots colder. I'm not against heat per se, but 80 ish would suit me fine.
England, of course, is MUCH cooler.
Hm. This post's rambling already, and I've barely started.
General impressions. Well, we spent some time in Texas, then a roadtrip along the gulfcoast through Texas, Louisiana, Missisippi, Alabama, and Georgia to Newnan, Georgia where RDG grew up. Most of that roadtrip was fast interstate travel, just passing through. Interesting for me, though, passing all those places I've heard of but know next to nothing about, places better known for their appearances in songs, movies,and books.
Two weeks. It's  too short. Like Monet's water lilies, a blur, an impression.
Specifics? I never met anybody who wasn't polite.
Obviously, our travels were not exactly all-encompassing, but that's my recollection, everybody was very polite. Helpful. Even when there was a barrier of mutual incomprehension. Truly, the whole food thing, well, there are familiar names on some things, but when you get it it's nothing like what those labels signify here.
Just as an experiment, I ordered "hot English Breakfast tea" with my meal in a Cracker-Barrel in? might have been mobile Alabama... Anyway, as I'd pretty much expected, I got a teabag (Darjeeling, not EBT), and a small jug of water not warm enough to make a goldfish sweat.

Somewhere, Louisiana
I'd been intrigued that they actually had a hot tea option with several varieties listed, however, it's clear they don't get many customers who call their bluff on it. No, I didn't cause a Basil Fawlty type scene. There'd be no point, she'd just smile and humour me, then deliver the same not-tea to the next poor unfortunate who asked. I just ordered an ice tea instead. they've got that off to an art. I suspect any one of the southern states consumes more tea than england does, just not in a form we recognise. You can buy the stuff in gallon plastic containers, everywhere. But hot tea? Nope. nobody seems to grasp the basic fact that you can only make tea by hitting the leaf with BOILING water.  In England it's understood. We do tea.
I expected, however that America would always do good coffee. Alas no. It's by no means guaranteed.
The food was good there, just um, strange. I'd ordered chicken stew with dumplings. No british person would have described what came as chicken stew with dumplings. Chicken in white goop with semi-solid bits of white goop, perhaps. It tasted okay, but looked like wallpaper paste.
We went to IHOP... "International House of Pancakes" What?
Well, the coffee was good as was the breakfast. but the pancakes? Um.
I left most of... they were too sweet for me. I'm more of a savoury eater, and sugary tasting pancakes with my bacon and eggs? that's just weird. Okay. That'll do for now, I've got brainfade.
Posted by soubriquet at 5:08 am 6 comments: