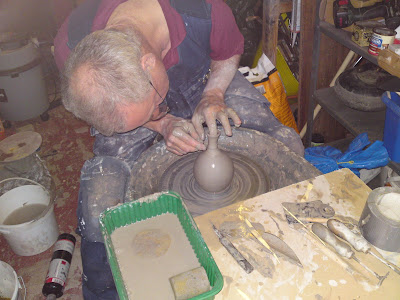 it's so nice to see soubriquet remount the horse. you must have been quite the potter extraordinaire because i think if i had a 9 year hiatus there's no way i'd be able to throw that well on my first day returning. wondering if it was enough to get you longing to do more or not? glad you all are having fun.

---I started to reply to Jim Gottuso's comment, and the reply grew. The reply seems to still be growing, and encompassing more than an answer, so I'm giving it a home of its own.

Reply:Well, Jim, I was a bit surprised that the body remembered the moves so much better than the brain.
I closed down my pottery in 1989, then I did a bit of throwing for a couple of local-ish potters who were not able to make the shapes or sizes they wanted, then.... nothing for a long time, last time was before I moved out of Rosebank Cottage, long before, so I figure nine, maybe ten years.
But seriously, I think it's like bicycles, really hard at first, then it becomes -not effortless, but... it seems to come from somewhere deeper than consciousness.
and yes. I'm going to do more. this.... need to get back into clay has been bubbling under for a long while now.
It's where I am. It is in me. It's embedded. Defining.
Reading blogs of potters made me long for that feel of clay in my hands, I love to see other people's clayworks, how different we all are, yet bonded by a common obsession. And I don't think you can be a potter without it being an obsession.
With the failure of my business, I became very disillusioned, disillusioned that I'd proved myself to be no businessman, disillusioned that people wanted the pots, but wanted to pay paltry sums, i was troubled by the thought that if your washing machine breaks down, or your car, or your drains get blocked, then you're ready to shell out your hard-earned cash to get it fixed, you may moan a bit, but you recognise the tradesman needs to charge a fair rate for his time and skills.
Yet the potter, you, me, the person you might ask to make you something, someting original, tailor made just for you, the only one like that in the entire world. And that something, conjured up from a mess of mud, a heap of powdered rock, transformed, transmuted into a new material, a shining, gleaming new thing, created for you, something which is easily capable of over seven thousand years of existence.
You want to pay the person who did that, for you, a lower hourly rate than a teenage shelf-stacker, or burger-flipper?
I had a customer who'd been enthusing about a mug on my shelf. But she griped about the price, telling me she could get one for a fifth the price at Safeway. I pointed out that the one at safeway was stomped out by a machine that, unattended, ploots forth 12,000 finished mugs per eight hour shift. (they're far more productive now, I'll bet).
I came close to being rude to her, but bit my tongue instead.

So, I became disillusioned. Not with the making, but with the selling, the making of things to pay the rent, churning out stuff I knew would sell, as opposed to making things I truly wanted to make.
I know now where it went wrong and why. I blamed myself for too long, and now I'm ready to make again. Not making was, I suppose, a protest, a pointless one.
Some years ago, I met a potter in the highlands of Scotland. she takes some of her pots up into the mountains, and leaves them there, amongst the rocks, in the murmur of the wind.
I should have learned from that. Make it, and move on, set it free, and let it find its own way. Too much philosophy? Yes, I suppose so.

I'm ready to move on, and to just make what feels good. And you guys out there have helped me realise what I should be doing.
I visited Matt Grimmit and was amazed at what he achieves in small wooden garden-shed, it made me realise that the excuses I was making to myself (I don't have room, no space, ha...)... were nonsense, that though I'd had all the toys in the past -vacuum-de-airing pugmill, dough-mixer.....oh, a big list... I had, I'm ashamed to admit, at one point i had THREE pugmills... well, one was a tiny two-incher I bought dirtcheap, hand-cranked chain-driven.. I stuck an electric motor onto the back, with a 16:1 gearbox I found in a scrapyard. Then there was the 3" vertical pug, I found it in an auction, described as "clay-mixer" I think I was the only person there who knew what it was. I paid twenty pounds for it, but had to have the motor rebuilt.
The de-airer, I got at low price as it was a new line for the manufacturer, who wanted me to be their test-bed, so, i used it, and reported on it, and every so often a heap of revised parts would be brought, and we'd try out the new configuration. What can I say. I like machines. I have oil in my blood.
But. In the depths of me, I know all these things are a distraction, just give me mud.

The wheel, after all these years of storage, gathering dust, worked perfectly, I resisted the temptation to strip it down, grease the bearings, replace and re-tension the drive belt.

The Mule, my muse, encouraged me. A bit like setting a toddler on a bike and seeing it wobble away. First clay ball duly wobbled away. Blobby. Yechh!. Back to the makeshift wedging table, and make a few pounds of clay do some exercises. Pretty soon the clay got the idea that I'd be expecting better behaviour this time. And it behaved.
The Mule, and my mother too, came in and heckled a bit. But hey, I was a tame potter in a tourist-trap town once. I can take heckling. You just have to get the audience to laugh. 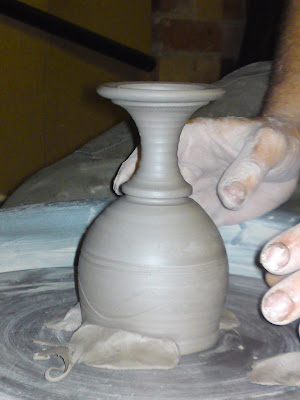 How did I feel? Great. The goblets had over-thick stems as thrown, I wasn't happy with the proportions, but I turned them back to a proper size, and was happy that I could still tap a leather hard pot to centre it on the wheel, that hands and eye still co-operate.
And... ouch. my back muscles, and shoulders, and forearms are in need of retraining. I've gone soft.
But changes are a-coming.
Posted by soubriquet at 6:04 pm 4 comments:

(This post, and the one it refers to relate to windows xp.
If you're a mac-user, as some visitors to the earlier post were, I know nothing about macs, beyond that they're very pretty, and cost an inordinately greater amount than a pc. Also, mac-users are conditioned into handing lumps of money to the mac store when they break, which of course, many mac users swear never happens.
If I had lots of money, I'd buy a mac, because I like all that see-through keyboardery, and cool white, and fewer cables... Then I'd get really upset when I wanted to do things without being held to ransom by Apple.)

We've been here before. Statistically probably my most visited post ever was not some beautifully crafted wordsmithing, it was the post I wrote on the 13th June 2008, titled "Firefox 3 not playing You-Tube Videos -Easy Fix!"
People are still coming from the nooks and crannies of the web, hoping to find the words of a guru. I can report that it has fixed some but not others, but hey, it was a fix for Firefox 3 Beta, using Flashplayer 10.0 beta.
We're so far past the beta stage now guys. Yet a significant number of people EVERY DAY! google their way to that post. What does that tell us? Something's broken in the interwebnets? "What's that, Skippy? You-Tube fell into the old mineshaft and is hanging there in darkness? and you've come to get help?"
Well, little feller, you can just push off, because there's no help, no glimmer of light in the old mining torch.
Over the past few days, the black-screen victims have been thronging, even swarming... You-Tubes must have been diving headfirst into non-beta wells. I wondered what was going on....
Now I know. The Dark has arrived.
I'll post this, as it goes so far, and take a foray into the darkness. "What's that, Skip?...........Yes, I'm going down the old mine, alone... with only a rusty old lantern... yes... If I'm not back in an hour, go get help? Good on ya, Skippy".

Phew, that was scary... rotting timbers down there, and darker than the inside of a witches hat. nearly lost it when those props in the western adit suddenly collapsed. But, deep inside the ol' mozilla mine, i found the tools and set to work. I'm not a computerist. Remember that. I did not grow up with bits and bytes, I can't do html, I do not speak cobol, algol, or linux, and the windows registry. Shudder! I stay well out of all that.

But I just fixed the Firefix not playing YouTube problem. Again. How?
By following my own earlier instructions.

This worked for me.
It may work for you.
It may not work for you.
If you get it wrong your computer will explode in a ball of searing flame.
No. I lied about that.
If in doubt,
go to windows help and support (off the start menu)
If you can't get there, then don't attempt to fix anything yourself, ever.
Click "undo changes to your computer with system restore"
Click "create a restore point"
After that, click close.

So, if anything goes wrong, you could restore your computer's brain to this moment.

Exit Firefox, and any other browser. Run the uninstaller.
Shut down your computer and reboot.
Click on the installer icon, install flashplayer.
You could reboot again, but it's not really necessary.

It works for me, and I'm big-hearted enough to share.
I'm not proud of it. I just think, if I can do it, anyone can, so why are you reading this? go fix the stupid computer. Okay?

Update December 21st 2009:
I found this, after another run-in with flash objects. In my case, it was that goear music gadgets that I have been using on my site would not play in Firefox, but worked fine in Chrome... Turning add-ons off, running ffox in safe mode led me to Adblock Plus. If it was enabled they would not run. I added exception filters in adblock for goear/swf...still dead. only thing that worked was to disable adblock. I found this at http://www.asfusion.com/blog/entry/firefox-3-adblock-disaster

"Adblock will block flash that it identifies as the same as another flash object that has been blocked. This means different things at different times but to the end user the result is often that they block a flash ad on one site, and find that flash videos stop working on another.
The common example is that a user blocks "http://download.macromedia.com/pub/shockwave/cabs/flash/*" on one site after seeing an annoying ad and now any other flash that matches that address (which is very common) is now blocked for the user everywhere."

Stop press: Harrow@SJ said...
Better solution for AdBlock:
-Click on the AdBlock button to bring up the menu.
-Right click all the filtered links, and click "Disable this filter on youtube.com"
-Refresh.
-Done, go rejoice.

I don't know for sure, there are lots of other sites pointing at Adblock, but Adblock plus' daddy says it's not his kid that started the fight, it was Mozilla, so......
try turning adblock off and see if it fixes anything. Worth a try, it's free, easy, and ...something else to do if you're feeling desperate.
Posted by soubriquet at 3:03 pm 10 comments: