Today there was some mending to do. Remember that valve that refused to co-operate? Bad Valve! You annoyed me.
Here come the persuaders, pal! 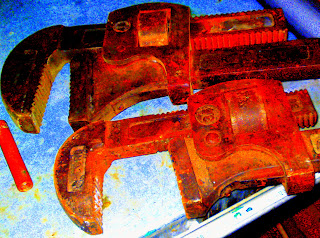 Oh. And a little tickle of oxy-acetylene. Oh I just love a good destruction of an inanimate enemy. 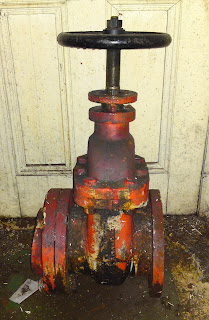 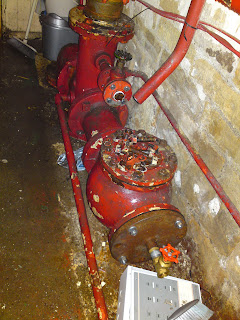 Hahahahahaha!!!!!! Take that, evil valve. Tomorrow, the spare valve goes in, and eventually I'll strip down the bad one, and see if it's worth repairing. It's probably from about 1923, so I suppose it's due a bit of attention.
Then there was the job to do at the tower top... When it was all done someone (not me) decided to try the lift. All was well until it reached the third floor, when a loud bang, a shower of sparks (and molten copper droplets) suggested there might be an electrical problem.
Oh great. And I'm supposed to be at a family meal, which is booked in a fifty mile distant eatery, in a couple of hours.
So I kill the power to the lift motor room, and to the shaft, and unscrew the roof-hatch on the lift. The culprit is eventually tracked down as a piece of "pyro" cable, copper sheathed and mineral insulated, that once fed a "lift arrived" light above the door. When the tower was lined with plasterboard, instead of bare brick, some clever soul had removed the outside light, leaving the old cable still live in a hole in the door-frame, just filled and painted over.
That was fine when everything was dry, and it was all hidden by filler and paint, nobody knew, nobody got hurt, except... Today, that frame was wet, hundreds, maybe a thousand gallons had cascaded down the tower, and, of course, some of that drenched the doors and poured into the shaft.
The cable becomes live only when the lift energises the door interlock. So I had to remove that redundant cable and check it all out for electrical safety.
Don't try this at home kids. 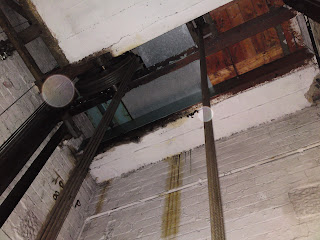 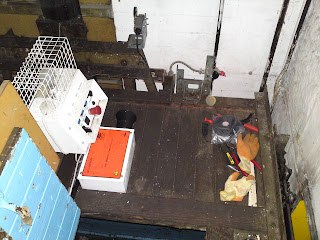 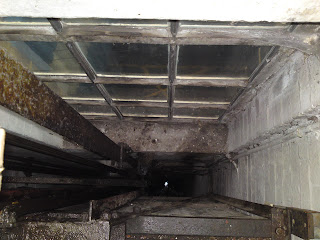 Oh look:  a distant glint of water from the swimming pool in the bottom of the shaft.

What's that... reports of a leaking pipe under the gym?  I'll go deal with that, shall I?
And a funny burning smell elsewhere?
Happy holidays.
No, I didn't get to the meal.
Next year, maybe?
Posted by soubriquet at 4:47 pm 3 comments: