The Jello Rows of Texas

Plus bonus video on St George and the Dragon, "Dragnet" style:

Back Home to Anarchy and Chaos 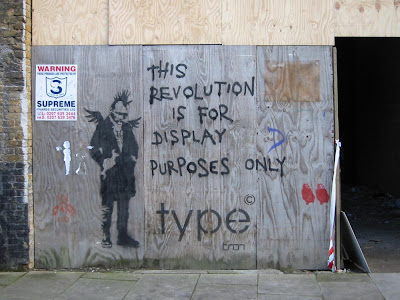 Back home, to a barrage of news about a dysfunctional society. Rioting looting, anarchy and gang warfare.
Yes, even in my own home neighbourhood. It seems there's a gang war between rival asian and black gangs. An asian guy was shot in the foot, and a revenge attack saw a black guy shot in the face, boom. And then it all kicked off. Elders of both groups joined together to lead a peace march through the community, but the carnival's headquarters has been torched, destroying all the costumes and equipment, businesses have been attacked, and my brother's friend was attacked and badly injured, just across the road from us, by four or five black kids, just because he was white. My brother took him to the hospital because the ambulance didn't come.
Nice, huh?
The taxi driver who brought me from the airport told me his friend's new taxi-minibus had been wrecked and burned, as had the same guy's personal car.
I've been out, walking around the park with my brother and his dog, hearing stories. Every few minutes a police car or van rushing somewhere, lights flashing.
I knew I should have stayed in Texas.
Posted by soubriquet at 1:04 pm 4 comments:

After the new School Meals,

...with the district switching to a 'lighter' diet, Esmeralda's flatulence began to give cause for concern.