We'll Just Have to go a Little Faster,or We'll Never Get the Jump Right. 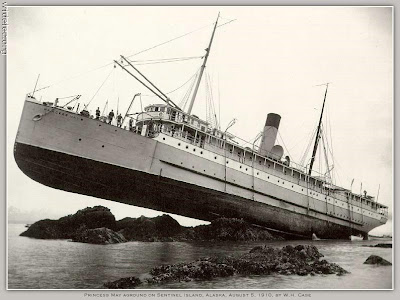 I lost my internet connection.
I tried all the usual stuff, you know, disconnect the cable modem, allow it to reboot, ditto the wireless router and the computer, nothing worked.


Eventually I dialled the number on my internet provider's bill, to hear the automated voice tell me there were no known service outages in my area. Then I dialled another number, hit the right buttons, listened to the recorded messages for a while, until i got a human. The human listened to my woes, advised me to power down the cable modem......
Eventually the human decided to transfer me to the tech helpline... So I got the lady in India whose speech was very difficult to understand. "I vant you to take off the power supply to the cable modem please...." Can I just bang my head against the wall instead?
She told me they could not get any fault to show on my line but said "theres something very strange". She would not expand upon that statement, just that an engineer would come out on Saturday morning between 08:00 and 12:00.
In the meantime I could clean my house, read "War and Peace", and learn esperanto, perhaps.
I'd have preferred immediately, because having no internet is like having no phone. Disconcerting.
I can remember the days when our phones were wired to the wall, in the hallway.
I'm addicted, I realise.
So the day after, I went out to have a look at the internet connection box on the front of the house.
The cover was off. the connection splitter block was disconnected, and the incoming cable from the street, from the interwebs.... was connected, directly... to a black cable headed upwards to my neighbour's flat.
I reconnected them all to the splitter block. My upstairs neighbour is an idiot, a fuckwit too. I rarely see him. I took my doorbell out because I was sick of his idiot friends and ex-girlfriends pushing on it, when ringing his, banging on the door, and throwing stuff at his windows didn't work.
Today the repairman came. I didn't tell him what I'd found, just that it had been bust open and disconnected. He looked at me, smiled and said... I hear what you're saying. We'll have a record of any connection other than your modem. Here's my number. Just call me if it happens again.

So I'm back again.

Although You Would Not Know This,

Yes, yes, I hear you. "Where are they then?"
"They're unpublished", I say, evasively. The thing is, I do my writing whilst driving, or in the bath. Or up a ladder, or whilst hammering at a piece of precision machinery, down in a hole beneath the earth, but always, always, in my head.
In my head.  That's where my novels are, and the plays, the screenplays, the collected works of me.

To steal somebody else's line, "I was born at an early age......." I was indeed. I was born in "The Imperial Nursing Home", in Harrogate, North Yorkshire. (my sister was born in a castle, Hazlewood Castle, I'm not sure, Imperial's pretty cool sounding, but a real life castle? One mentioned in the Domesday Book in 1086 a.d.? Damn. She wins in the cool birthplace stakes).
As soon as I could express myself I was making up stories, inventing invisible friends, creating an extremely detailed back-story for my teddy-bear. Ted Edward was a bit of a tycoon. He was, for the most part, choosing to live with me, a toddler in a small village in Wharfedale, but in his other life he owned a fleet of trawlers that operated out of Grimsby, into the high arctic, sometimes he was out there, skippering in the gales, north of iceland. Other times he was suavely dinner-suited, driving his Rolls Royce to whatever mysterious assignations grown-up teddy bears had.  And he had a big truck. With eight wheels.
Ted Edward would sit with me on the rusty bridge over the wharfe, and point out the great mysterious fish in the dark waters below. Bincontyles, and Boncontyles, they were. To this day, no adult has ever seen one, nor ever will. The bincontyle can grow to over seventy six feet, and could swallow a house if it wanted to. Boncontyles are somewhat similar, only green.
As I grew older, grown-ups ceased to always pretend to believe what I told them.
Ted Edward died, only about ten years back, victim of a flood caused by a burst water pipe. Gnarled old sea-bear, he'd survived so much, we'd been apart for years, I grew up, moved away, lived in other countries, and he, well, I understand he was travelling a lot, building a railway over the Andes, prospecting in the Yukon, I understand he was the first teddy bear to meet the Dalai Lama, and of course, the first bear of any sort to circumnavigate the globe in a steam-powered airship of his own design.
Some time in the early nineties, we were re-united, shared a house in Leeds, I told him of my mundane travels, he told me of the time he sailed Cape Horn in a bathtub, whilst escaping from pirates.
Then, one night, as he was hibernating, in my store-room, a pipe burst. Ted didn't stand a chance. The mould got into his sawdust. His growl disintegrated.
I was there at the end. Brave bear, the last few days he refused pain-killers, but swigged bottles of trawler-rum, raving about the old days, and... the island... with the wreck of an old wooden ship... chests of doubloons, preserved in the dry cold, they dragged them to a cave, covered them with rocks... that was during the war, after they'd drifted for eight days in the liferaft. They were taken off the island by a german ship. He thought it was the Tirpitz, but they were kept below, until it reached port. He escaped, built a boat out of packing cases and bedsheets, sailed home in time to be re-assigned to the pacific, and when he eventually returned home, his old log, with the coded map of the island had been destroyed in the bombing.

He told me "Find the island, my young emperor, on the island are the documents, everything you will need to re-claim your throne."
Posted by soubriquet at 6:16 am 2 comments: