On Entropy, and Other Random Things.

Soubriquet Labs has been concerned, as many have, by the recentish economic slowdown. We have noticed no slowing down, however, of rust.

This thought is prompted by noticing that the Land-RoverDiscovery seemed a bit throaty last week, all of a suddenish. And there was that greasy dieselly smell in the interior air when idling at traffic lights. Not that I have anything against the smell of diesel, of course, to have a grump against it would be an insult to the fact that diesel makes the world go round.

All those good things that we crave, be it chocolate, fresh bread, oranges, whatever, all are brought to us by diesel, at some stage in their travels. But I digress. It's what I do, digressing. Could be a quirk, an eccentricity, an annoyance, or a downright offence. I think it's Attention Deficit Disorder. That's ADD to you as opposed to ADHD, which includes hyperactivity, I've very rarely been accused of hyperactivity.

But you see, I was always being ticked off at school for not paying attention. I was looking out of the window, carving a hole in the desk, or reading the wrong book.

This is why I started Soubriquet Labs. Soubriquet Labs exists to invent and perfect the things sensible labs won't get involved with. Which brings us back in a roundabout way to rust.

You see, my Discovery is succumbing to entropy. 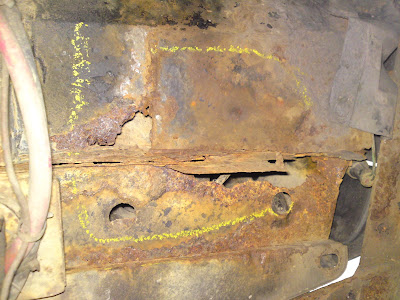 (A nasty bit of entropy)

The way around that, of course is welding. Just had to do a bit of that, but the noise? oh yes, the noise. See, I just assumed my hearing had suddenly improved, until, until, that is, I was walking across the car-park at work and noticed I had no number plate. Just a black rectangle. So I gave it a tentative wipe, and lo! and behold... yes, a number plate. covered in sooty stuff. Why?

Surely the exhaust was placed in such a way as to distribute the fumes into a proper soot bag?

No. It was not. In fact it was not positioned, so to speak. On a 200 tdi Discovery, there's an exhaust hanger just behind the axle on the rear near-side. Behind the hanger, a small (trivial) silencer box and a couple of feet of pipe. In my case, not. Nothing behind the hanger. My silencer back-box had gone to join the army of rusty, forlorn vehicle parts that adorn our roadsides. I have no idea where, as to when, within the last um, seven to ten days.

The result of this is that I had to buy an expensive assemblage of pipe and boxes, which led me to thinking of the role of rust in the economic cycle.

Our motor industry is almost at a standstill, I suspect, partly because cars are so much better lasting than in days not so long gone by. Time was, when the average british built motor vehicle had as much bodily integrity as a colander after about six years. Those old Mark 2 Escorts, and HA Vivas which turn up at classic car shows, along with the last surviving Austin Maxi, and a Hillman Minx, are not classics at all. They're just survivors.

When Rover was selling the Rover 2000, the P6, it had an advert showing one alongside a heap of rusted car bodies with the slogan "Thank Goodness in These Days of Mass Production, a Rover is still a Rover". My dad's company car was a Rover 2000. At three years old it had holes through it.

You'll pretty much never see a landrover on an old V or W plate. In those years, BL was making the chassis and bulkhead out of the cheapest steel it could buy, much recycled, not a lot of new iron in the batch. Vehicles of this era needed patching so regularly that you could hire mechanics on powered skateboards to slide under the car during the commute to work and weld as you travelled.

The carpets did not last long either. Fires whilst commuting were regular. Luckily, firemen on mopeds patrolled all major routes with buckets of water on panniers. Ahhhhh! the good old days...

The british car industry was heading toward the perfect consumer car, one which crumbled half an hour after the warranty ended. Thereby prompting you to go out and buy a fresh one.

You younger whippersnappers will scoff at this, call it a load of guff, or you would if you knew what guff was. But the veterans amongst us know the truth. Rust is essential to economic regrowth.

It is no surprise that rust is at its active at the cold ends of the year. If you cast your mind back, you may remember winter, it was a week when all the schools closed, arctic blizzards scoured the land, and Britain ran out of salt.

Back in the old days, salt was spread liberally all over the highways at the slightest hint of a chilly night. Happy council workmen shovelled it over pavements, and every remote estate and cul-de-sac had grit boxes. Salt was so abundant that some years they gritted in summer too, just in case.

But the winters were worse, of course, polar bears used to be a big problem in Heckmondwike.

Sowerby Bridge was overrun with penguins in the winter of 1963, begging for scraps outside fish n'chip shops, and importuning passing mariners.

What's this to do with Land Rovers?

Well of course, when the world shuts down because there's an inch of snow on the roads, who is it who rushes outside with glee and plans a trip to the hills? 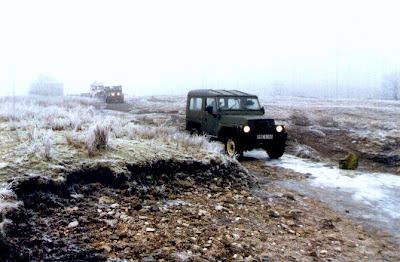 Anyway. Britain ran out of salt. Rationed, it was. Highways agency demanding counties which had salt to relinquish it, in favour of those which had not remembered to buy any. A yellow jacketed bloke snatched the salt shaker out of my hand as I prepared to enjoy my fried egg sarny, "Sorry mate, requisitioned" He was assigned, I believe, to be strapped to the bonnet of Lord Mandelson's official conveyance and strew salt in its path.

As the chaos abated, and a thaw appeared, our masters told us they had arranged for forty thousand tons of rock salt to be brought from Europe. It should arrive here by next july.

Meanwhile, Highways agency chiefs are fearing a backlash, if no winter occurs next year. In order to save their blushes, Soubriquet Labs has been stockpiling snow in rented warehouses. Next year, Soublabs plans to deploy thousands of council gritters, loaded with snow, and using grit-spreading technology, will overnight coat the nations roads in slippery white. 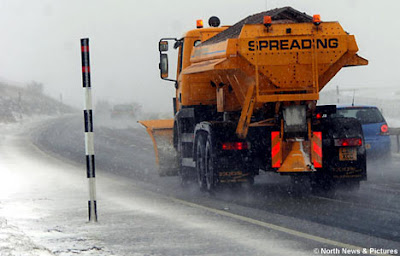 The ensuing collisions will stimulate the automotive economy.

The very same gritters will then, after a few days, spread salt on a few bus-routes, thus kick-starting a new cycle of rust. Soub-Labs expects to take billions in backhanders from the industries which benefit from snowy conditions.

On another digression, Soubriquet is concerned at the profligate waste that occurs every day. "Just nipping out for some fresh air". How often have you heard someone say that?

Using air once, and replacing it every morning with fresh is just wasteful.

The professor was eyeing an air conditioner in a shiny new Range-Rover sport at Farnells the other day...... So, he thought, what if... what if instead of using new air you could pass it through an air-conditioner, twice....

Think of it. Not fresh. but re-conditioned.
Posted by soubriquet at 12:57 pm 5 comments: