A Visit to Bastrop, Texas. 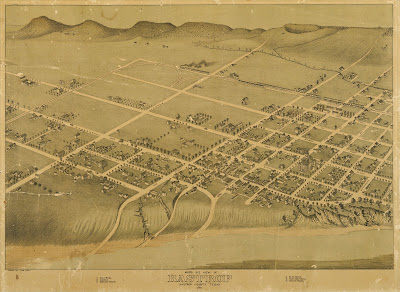 Bastrop, Texas.
Had things gone a little differently, it might have been the capital of Texas, and a very different place to the town RDG and I visited in early april.  Steven F Austin, the founder, and the man known as "The Father of Texas", eventually gave his name to the state's capital, about 35 miles to the northwest. 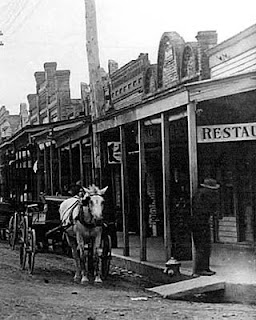 A good thing, I say, because it resulted in the town remaining small and friendly, and utterly charming. 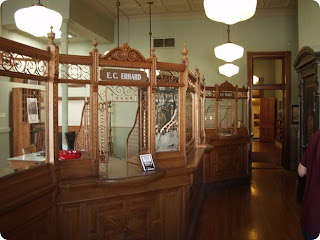 The Old Bank visitor centre is a good place to start. 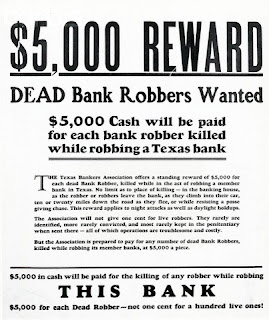 The Red Dirt Girl and I stayed in the Pecan Street Inn, which I can wholeheartedly recommend.  Hosts Shawn and Bill were founts  of local knowledge, and the inn, a historic family home with a beautiful interior, was a delight to stay in. If only all bed and breakfast places were as good as this. The house was built for the local sawmill owner, and as sawmilling was the primary industry of Bastrop at the time, no expense was spared. As a man who works in the building industry, and in historic buildings in Britain, I was fascinated by the house, by the details of how it had been constructed, the matched timber doors, the detailwork. It's very different to how we build in britain, as we are mostly building in masonry, and this house is all wood.
The builders of the era knew things the current generation forget. That deep porch keeps the direct sun off the south and west-facing walls in the middle of the day,what we now call "passive solar control". All the older southern houses use wide porches to control solar gain. 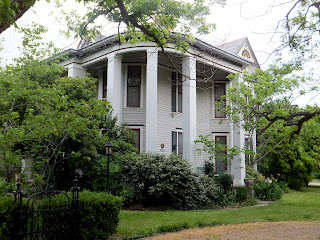 Note the old gate, I'll bet someone was very proud of it, back when it first arrived. 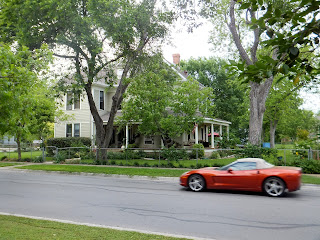 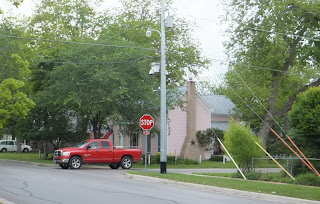 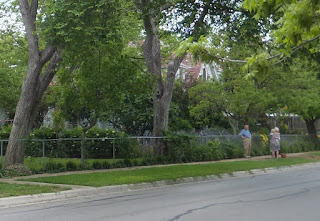 Neighbourhood where elderly friends stop to hug and chat.


And Bastrop has a sense of irony too. Literally, I suppose. Rusted corrugated iron roofs overlooking the Colorado River. Up at the top is the Olde World Bakery, where we sat and listened to what seemed to turn into a private concert, with a great young singer, whose name is Bruce Fraser .  (RDG will give his details in the comments, if I'm lucky). He's a talented guy, honing his craft there, until he moves on to Austin in the fall.
The bakery, of course, is a great place to eat. Several people recommended it, And we found a couple of our fellow Pecan Street guests sitting on the leather sofa when we arrived.
Soon it was ours, with plates of delicious food in front of us. Bruce entertained us and the staff kept us informed as to the progress of the coconut macaroons that had RDG and our friendly musician salivating like Pavlov's dog. 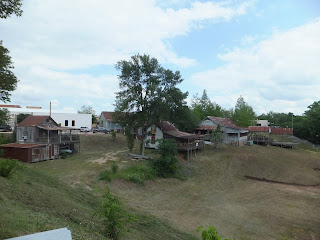 There's a now closed dance hall/eatery, known as The Yacht Club. It's soon planned to reopen as a microbrewery. I love microbreweries! 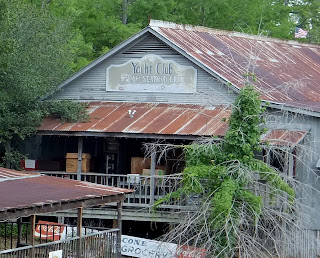 Next is a music shop, with a wide porch that is home to jam sessions known as "Pickin' on the Porch". We entered, because it just looked so interesting. I confessed I couldn't play any sort of instrument, but asked if we might poke around a little. 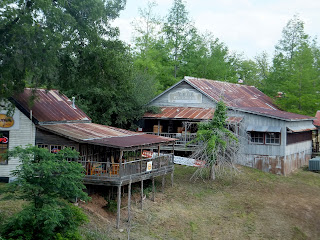 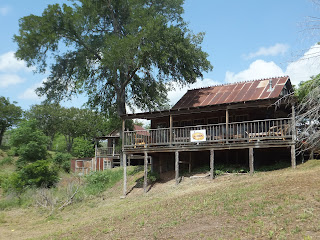 Larry Wilson, the proprietor greeted us as if we were real and valued customers, and told us stories of some of the great musicians he's played with, whose pictures we saw on the walls. Stevie-Ray Vaughn, Jimmy Carl Black, Arlo Guthrie, to mention but a few.
It was fun. A real nice guy, and before we left, he gave us a cd of his band, which we listened to that evening on the drive into Austin, of which more later.
We did look, very tempted, at a Mandolin.  RDG's daughter plays guitar, and wants a mandolin. Maybe next time? 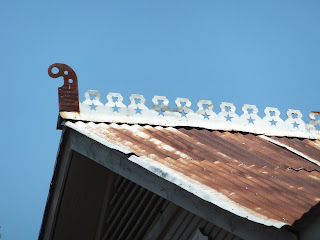 Almost like a viking roof, but in galvanised steel. 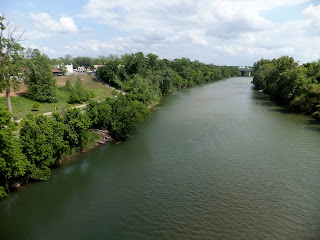 The Colorado River
(well, one of them)
RDG and I spent a while on the bridge, in the sunshine, watching the world go by. 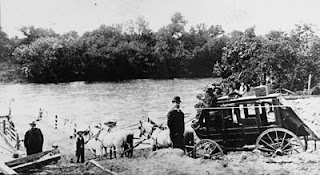 Crossing the Colorado at Bastrop before the bridge. 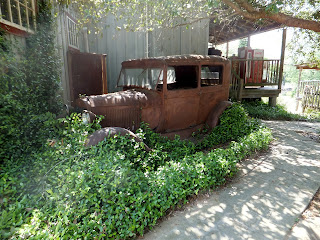 
There's more to say about Bastrop. A little googling will tell you of the terrible wildfires that ripped through the nearby forests late last summer. And the way the town rallied around the folk who lost their homes. 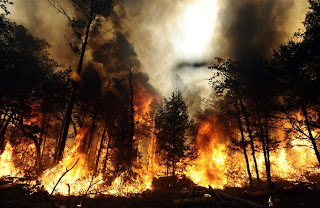 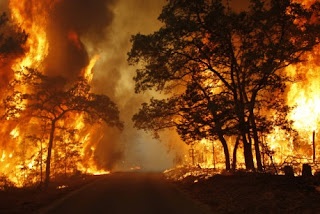 The fire crews who came from near and far,  The volunteers, the people who opened their homes to the refugees from the flames, it all seems to fit what we saw of the people here.
Generous and friendly.
We spent a while in the Art Guild, with some ladies who immediately seemed friends, I must email them, I promised I would. 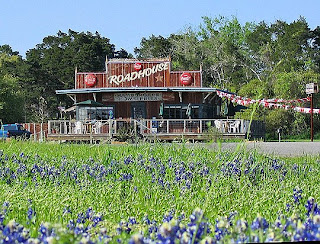 We ate great burgers at The Roadhouse.

But the best experience of all was the night after we'd left.
We discovered, after a day driving through Texas' hill-country, that someone. Someone? Well. Me. I confess, me, had left one of RDG's bags behind at the Pecan St Inn. and we'd just booked in at the Gruene Homestead Inn, near New Braunfels, closer to San Antonio.
Although we'd spent a day driving and meandering to get there, the most direct route to Bastrop was only about sixty miles, so we set off again, leaving a message on our erstwhile landlady's phone. On the way there, the noise which had started earlier that day on the car, was getting ominously louder. We pulled in at a rest area,  and I lay on the blacktop as RDG rolled the car forward and backward past me, in and out of drive. I was pretty sure that what I was hearing was a failing prop-shaft universal joint. And I was a bit concerned at the risk of it overheating and failing completely,  so we stopped at a garage that claimed to be open for another hour and a half, -I just wanted, if we could, to put the car on a lift, and check it out, grease it if possible. But the proprietor said his guys had gone home, come back tomorrow, not very interested, bye.

So we continued, carefully, to the little town we'd left that morning. Our landlady had the bag. She'd realised, almost as soon as we'd left, that I'd left the bag by the bottom of the stairs, and had jumped in her car to try catch us. And tried to phone, but RDG's phone was switched off.
All well there, anyway, we thanked her again, and set off back toward town.
Seeing a garage with lights on in the bays. I pulled in, and explained our predicament. They were closing, trying to finish up a job, family, barbecues, beer, seven o'clock on a friday night, a grand-daughter visiting...
But hey. We'll  listen. and take a look. and, well, we'll put it on the ramp.
My diagnosis was agreed. Propshaft u-js.
And on a Chevy Suburban, unlike my old Land Rover, there are no grease-nipples, you can't just attach a grease-gun and give it a couple of pumps. It's so frustrating. If I had the tools I habitually carry at home, I could have done it myself.
But not here.
"Where are you going?"
We explained. booked in, bags and medicines sixty miles away, and the boss-man went off, came  back, said "I've talked to my mechanic, and he's prepared to stay and do it, if I can get the parts tonight."
And he could. He quoted a price that seemed very fair, especially two hours after their official five p.m. closing time, and took a cellphone number for us, recommending a couple of places to eat or drink for the estimated two hours we'd be waiting.
We did eat, sitting at a table outside Maxine's on Main, listening to the band around the corner.

When the car was ready, I saw the mechanic return from a test drive around the block, and tried to give him twenty dollars to get a beer and a steak on us, but he wouldn't take it, nor would his boss on his behalf. Both said, no, we're charging you a fair price, and we're satisfied with that. Look on it as karma, how would we like ourselves or our loved ones to be treated, if they were in a fix, as you were?
And I thought back to jobs I've done as a plumber, the times I've not charged, or vastly undercharged elderly people who were worried about money, or the times I've driven out into the snow at four in the morning, when I'd rather be asleep in bed, but I've heard a desperate voice on the phone, a child crying in the background. Maybe it does come around.  Maybe. But really, I think it's about goodness, good hearted people. Thank you, thank you,
Need for Speed, 815 Chestnut Street, Bastrop. Tx.

Let it just be said, I could see myself living in Bastrop, I really could.
Whether I could make a living out of pottery and a bit of plumbing? Who knows?
I'd like to try!

RDG mentioned the oldest Drugstore/Soda-Fountain in Texas, and their Bluebell Ice-Cream. I confess I was taken aback at the size of the milkshake. Now in Britain a milkshake is mostly milk... In texas it's mostly ice-cream. I would have regretted it if I'd persevered all the way to the end, I'd have burst. Everythings bigger in Texas. 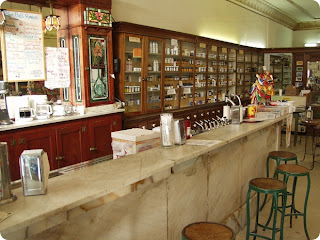 This picture was "borrowed" (stolen), as was the one of the interior of the bank, above, from another blog, found by google image search.
Here
(Worth a visit for more pics around the Yacht Club area)
Posted by soubriquet at 3:53 pm 8 comments:

In a Quiet Belgian Town

One morning there was a new addition to the town square. A red button. And a sign, saying "Push to Add Drama"