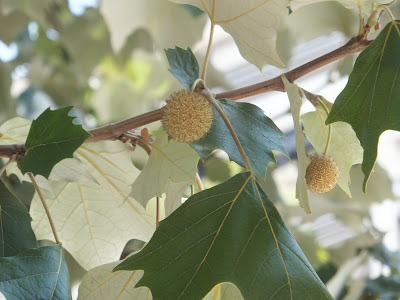 Platanus Occidentalis
I asked the Red Dirt Girl what kind of tree this was, on a Houston street, a pretty tree, with these interesting leaves, so contrastingly pale on the undersides, creamy bark, little round spiky fruits.
I knew she'd be able to tell me, she being the garden-designing woman that she is.
"Sycamore" she says.
I look at her, stunned. "Oh no it isn't!",
"Yes it is!"...
We argue a lot.
I truly can't believe that she'd get such a simple tree identification wrong. Sycamores don't have little round seed bodies, they have helicopters, little paired wings which flutter in a spiral to the ground, big trees that are probably the easiest trees in the world to grow, a gardener's bane in Britain.
Introduced here from continental europe, (I'd been taught that it was introduced in the Norman era, as a fast growing shade-tree, but on attempting to research that, I find there's no consensus. We find that there's no evidence in bronze-age charcoal of sycamore, which suggests it was not found here then, but other 'experts' assert all manner of eras for its introduction from Roman times to the 1700s. 14th century carved leaves, Chaucer etc., there's so much conflicting opinion. 1500s in Scotland).
The wood's traditionally used for butchers blocks and breadboards, rolling pins, bowls, furniture frames and kitchen tabletops. Fiddle backs, carved ornamentation, hard, close-grained, but not much good as construction timber. I'm no stranger to sycamores, I've cut a few down, fallen out of others, and brushed and raked many tons of sycamore leaves over the years. They're pretty enough, but if you park your car under one you'll curse, as within a few hours it will be covered in sticky spots of sugary sap,  aphids, caterpillars... Sycamores are far better as somebody else's tree, to look at from a distance.
My mantelpiece over the fireplace at the old cottage was a thick sycamore beam, 6ft by 8"x4".
Well, we were both right. The tree we were looking at is Platanus Orientalis, also known as the American Sycamore. 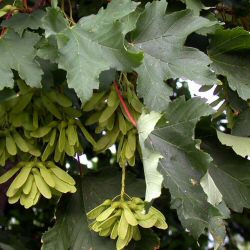 But the Sycamore of Britain is Acer Pseudoplatanus.
The true Sycamore is neither. It's not even vaguely similar, it's the sycamore (sycomore) of the bible, and it's surmised the 'newly' arrived tree was so called by monks returning from the crusades. why?, I ask, as there seems to be no similarity whatsoever, bark, leaves, fruit.... just none. Not a jot. 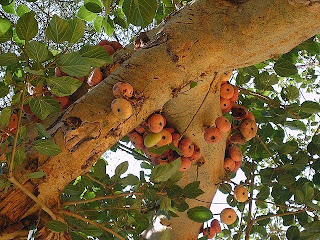 
1 Kings 10:27 "And the king made silver to be in Jerusalem as stones, and cedars made he to be as the sycomore trees that are in the vale, for abundance."
She was right, and I was wrong.
And vice-versa. It's a sycamore. Just not the sycamore I'm used to.


I'm used to being able to identify the trees, wildflowers, crops around me, but of course, in north america, everything's different. I look at it and I've no idea what kind of tree I'm looking at, what birds nest in it, what the uses of its wood, bark, seeds, leaves, or sap. And that makes me aware of all the stuff I don't even know I know about things that grow here, stuff my grandfather started to teach me as soon as I could listen.
I've got a whole big new stack of learning to do.

P.S. Blogger's new interface is driving me mad. If there is some strange spacing and layout on your screen, well, I'm trying to find the errant html, but I'm not an html person, and I'm ready to throw bricks at the computer. Curse you, blogger!