A Bookshop, and Stationary Store

On Sunday, I thought I'd go for a drive, my sister was visiting and I suggested heading vaguely northward.At the outset, I was thinking of taking the Great North Road (these days mostly known as the A1, or A1M), and heading for Thirsk, then meandering over the North York Moors toward the coast. Or maybe heading west toward Carlisle? No definite plan anyway. Then, once on the highway, a thought popped up. Bamburgh! At Bamburgh, in northumbria, there's a mighty castle raised up over the seacoast and countryside, it's everything you might imagine a castle to be. I've passed it en-route to Scotland, many a time, I've watched horses gallop on the beach below it, but I've never, until now, been inside.
North of Newcastle, I left the major route and headed for smaller roads, nearer the sea. I have a fascination for the sea. I love it. I think, maybe, way back, some of my ancestors were vikings, driving their boats onto the beaches of the north-eastern shores of britain. Planning, perhaps another tour of pillaging the monasteries of their treasure. A lot of those Vikings liked what they saw over here, cashed in their return ticket, bought a couple of cows, married  local girls, and lived happily ever after.
Bookshop? yes, I'm getting there.

Up the coast from Newcastle, you pass castle after castle, castles are everywhere... 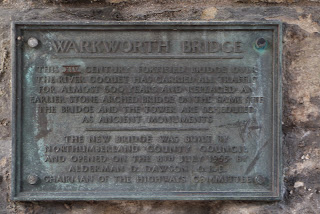 Over 600 years of service

In Alnwick, however, feeling that it might be time to stop and find a cafe, serendipitous happenstance, I looked out of my window and saw a sign saying Barter Books. So I hooked a quick left into the old Alnwick Station car-park. Barter Books. I first hear of it when the 'Keep Calm and Carry On' poster was being talked about on the radio, apparently it all started when the owners of Barter Books in Alnwick were unpacking a box of second hand books and found, in the bottom, a folded wartime poster. They had it framed and hung it in the bookstore, visitors loved it and wanted to buy it, so they had 'Keep Calm' posters reprinted, the rest is history. The poster was printed by the Ministry of Information, but never went into general circulation. After the war, all the posters were pulped. Or so it was thought. Two seemed to have survived. Then someone found fifteen originals in an old trunk in the attic. But the poster's popularity started with Barter Books. And I, looking for the history, had visited Barter's website, and found their shop to be the coolest bookshop I could imagine, built into an old station, a bibliophile's dream. Writers quotes festoon the place, a huge mural of famous writers adorns the wall, comfortable seats, tea/coffee/cookies with an honesty box, a station buffet serving up meals in the old waiting rooms, leather chesterfields..
Oh my. 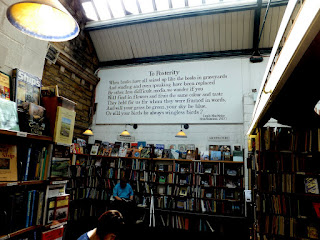 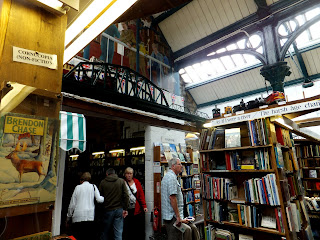 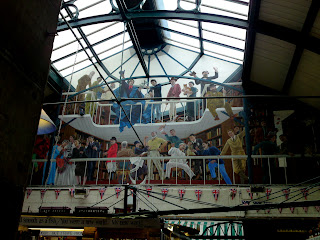 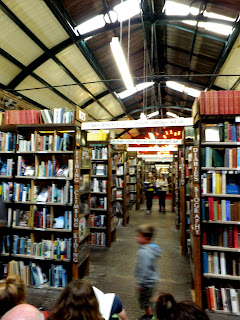 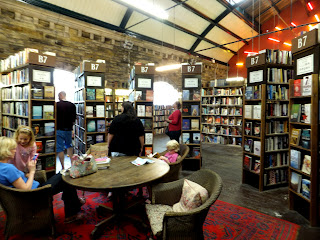 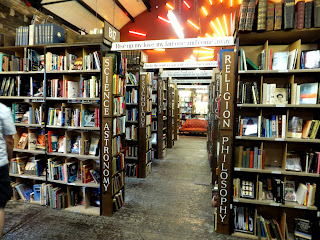 So Much to Read 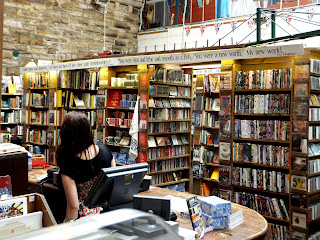 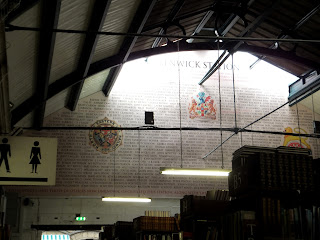 Remembering the names of people of Alnwick Station. 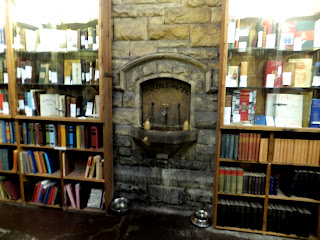