Back to a sort of normal on monday. It seems surreal. Early morning phone call, a tenant's premises flooded, fire sprinkler pipe high up holed. only a pinhole, but a lot of pressure and a weekend make a small problem a bigger one. I get a ladder, prop it against the pipe, a somewhat wobbly perch, getting very wet, so I don a makeshift rainsuit, made out of a polythene trash bag.
A piece of rubber clamped firmly over the hole will hold it until the sprinkler guys can get here with a scaffold tower and replace the pipe section. I drive a few miles to another site, load up a wet-vac and the numpty labourer, who, as usual, is griping about being expected to actually work. "Why should I have to do it?", he whines, like an eight year old.
I set the old misery-guts to work clearing up pools of water and picking rolls of furnishing fabric out of the pale, slightly rust-tinged flood.
He brightens up when i tell him I'm leaving him there all day. Sweep the roadway,  empty the bins, clean around all the fire-doors... A default activity that to him means "find a quiet corner out of sight of the cctv cameras and light up a cig".

Me? back to our main site to investigate a long term leak. The roofers and the steeplejacks have messed around up there many a time, they were ordered to scrape off  all the old repairs, get right to the root of the problem and fix it.

But it's not fixed, the tenant below has water seeping out of his wall. And the tenant below him had a window-ledge full of wet, too.
Time to get a ladder again. My verdict is that there's something I can't see going on behind the parapet wall, and the only way to find out is to dismantle a yard or so of parapet, which requires a lot of full-on hefty bashing with a big hammer, and quite frankly? I'm feeling a bit destructive. 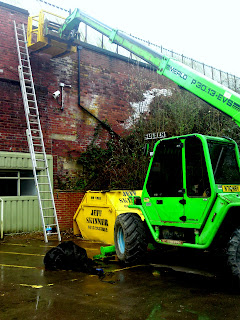 Bashing a thick brick wall from a wobbly standpoint on a ladder would be stupidly ineffective, so it's time to wake the green machine and have a platform to stand on.

Having dismantled the wall, we find that the contractors have been less than diligent, and just pasted new goo over old goo, because it's not the gutter-joint that's failed, oh no, that's still as firmly bolted as it was on day-one, a hundred years ago. Oh no, it's just past that, where the cast iron, close-on an inch thick, has cracked right through, leaving a gap almost an inch wide all around. This annoys me. you pay someone to locate and fix a problem, only to find out months later that they took the easy way, and charged handsomely for not even finding out what the problem was. 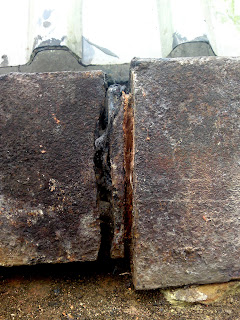 The gutter's a hundred feet long, so, given the extremes between summer and winter, the expansion and contraction must lead to fearsome forces. And it sits atop a wall that's over two feet thick, so any leak goes right into the wall. 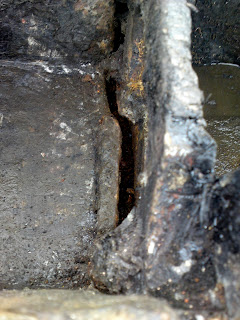 These days there are very good flexible sealants, able to accommodate 40% or more movement, and that's what I've repaired it with. Time will tell.
My boss said "Can't it be welded?"
He doesn't know that cast iron needs to be heated almost to red heat before welding, and if we wanted to do that up there we'd need to take the roof off. I have another plan, if this one fails, always have a back-up plan...
So there we are. Right back to normal.
Posted by soubriquet at 5:18 am 6 comments: