"Cull Does the Rock and Roll" 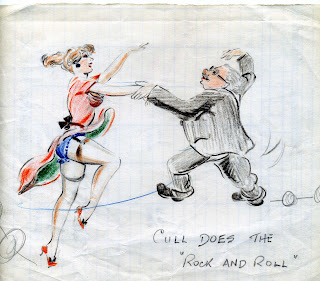 This is, I think, My favourite of Cull's cartoons.
It so richly embodies the fantasy life of a portly little man in a grey suit, in a government ministry office.
Cull was ever optimistic. I'll bet, in his dreams, he was a demon dancer. 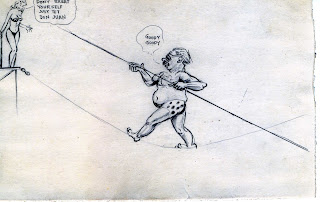 Ever the Optimist!
Posted by soubriquet at 5:08 pm 4 comments:

Oh I'm Burning My Brains In the Backroom,

"Oh, I'm Burning My Brains In the Backroom,
Almost setting my cortex alight,
Trying to find a new thing to go Crack-Boom!,
And blow-up a xenobathite! "
My Uncle Walter, (actually, great-uncle Walter) was what they called, in olden days in Britain, a "boffin", or a "back-room boy". The boffins were the scientists and inventors, and the tinkerers and makers, the thinkers and developers who were necessary to the progress of the twentieth century. "back-room-boys", so called because they were the hidden ones. A few heroic types made all the headlines, but the wonders of science in which they flew were designed by back-room-boys and boffins.
When I was a kid, in the nineteen fifties, Uncle Walter was my hero. He made all manner of things, he could cut and make an escapement wheel for his grandfather-clock, all on his own, I remember him drawing it out, calculating angles, cutting and filing by hand.
The clock was always referred to as the Congreve clock, because it had once belonged to William Congreve .  (Walter's grandfather took it in part-payment of a debt, in the mid 1800s).
Anyway, when I was a child, visits to Sybil and Walter were eagerly awaited. We'd get to feed hens, collect eggs, dig vegetables, pick fruits that would be miraculously transformed into a table-full of good food.
And Walter would, on rainy days, get out the paper and pencils, and we would draw. The paper had other stuff already on the back. Printed in blue, stuff about boost gauges for a Rolls-royce aero-engine, or the wingroot modifications for the Mark IV English-Electric Lightning, the fastest supersonic interceptor in the world... Or the nitrogen tank modifications on the Victor nuclear bomber..
Or something unknown on a Percival Aircaft. Probably a Percival Proctor.As here. 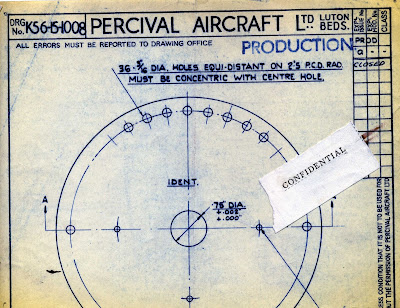 Walter worked for the Air Ministry, and he was, I think, a draughtsman. You might think the job of a draughtsman in the servive of the air ministry would be a dry-as-dust existence. It seems not. I inherited a folder of drawings, from Walter, some I'd seen, when a child, some, not until my father gave me them, telling me it was Walter's wish I should remember learning to draw, on those rainy afternoons. What I found in that folder made me laugh, and reconsider the back-room-boys. Here's a few samples,  all drawn by "Cull", who I remember meeting, once. A rotund, roly-poly little man, who was full of laughter, and smelled of beer and pipe-tobacco.....
Float your thoughts back to 1956.. 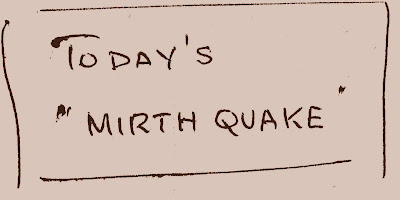 The card opens to reveal a busty girl... 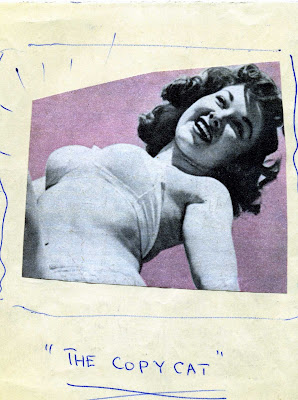 On the next page: 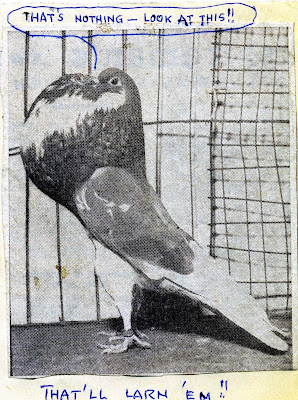 Another pic shows Uncle Walter, the keen gardener, who would take basketloads of his produce to work for his colleagues, as a market-trader, admonishing his assistant, Sid. 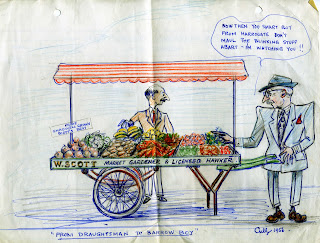 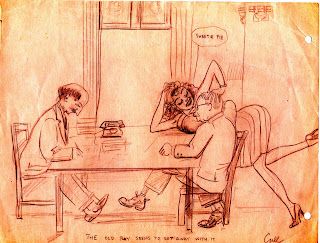 But it seems the old boy had a bit of a reputation...
Posted by soubriquet at 3:36 pm 2 comments: