....was down for three days following a major equipment failure in the U.K. "Email, Messenger and internet functions were unavailable to users in the Middle East, Africa and Europe after a crucial link in the BlackBerry network failed."

Four days later, they were back to normal. That same police force which was urging drivers to eschew the use of messaging devices whilst at the wheel used Twitter to warn drivers of hazardous fog.


Source:  The National via The New Shelton Wet/Dry
Posted by soubriquet at 5:28 pm 4 comments: 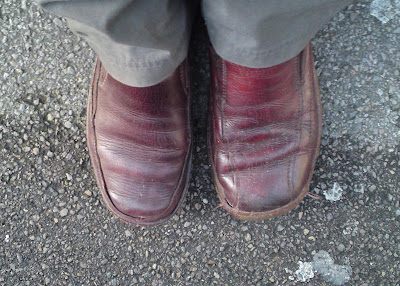 I dreamed a little too long this morning. The framework of the skyscraper kept flexing as it grew, it had started as steel, but was becoming organic. And I was trapped on the eighty-fifth floor and there was something desperately important that I needed to get down to ground level for. All the lifts had jammed as their shafts distorted, the concrete stairs were crumbling, exploding into dust as the immense forces of the shifting building chewed at them. I was going out, the window-cleaning cradle on its suspension ropes was my only chance...
Then the alarm went off and I hit snooze a couple of times, then I thought "F***! it's not saturday!", and leapt into getting-up mode.  Ten minutes to get out of the house... I thought I'd done well, rolled through the gate at work just as the 8 a.m. news started on the radio. It wasn't until I was on my way home, nine hours later, that I wondered why my left foot felt less cushioned on the heel than the right.
D'oh!
That, however, is one of the good things about being male. Going to work wearing odd shoes is not a disaster. And nobody notices, and if they had, we'd both have laughed about it.
Usually, though, my asymmetry is confined to socks.