In a comment to my earlier post on the subject of considerable heat beneath the site of a brick-kiln, even several years after it was demolished; Relax Max said:
"I was reading a book recently about the construction of a huge brick hospital in the 1870s and it said all the red bricks were done on-site back then. I guess they just selected a site that had the right kind of clay. Many thousands of bricks. I can't remember how it said they fired them and I can't find the book right now. Today, of course, they would just truck them in. Times change. Here is the building in question. I'll have to look harder and find that book. :)
http://tinyurl.com/yg677co"

Little did he know that he would unleash a post on bricks... quite literally, as you will see later, post, bricks...
I suppose I was interested in bricks, and how things, houses, for instance were made, even before I became a potter and fell in love with the magical transformation of clay when subjected to fire.
As a child, I loved making things, and I'd scoop clay out of the ground, wet it, and model it to make animals, people, buildings, bridges, roads.... and dams, oh yes, dams. on wet days, puddles and clay, what joy. I..... er..still do that, damming streams of rainwater, when I think nobody's looking. I remember hearing the biblical story about the israelites having to make bricks from mud, with straw in them. These were for Rameses the Second's city in 1490 b.c. The Israelites were, (and the archaeological record supports this) deliberately wasting straw, provided for the brick making. Without the fibre reinforcement and water-wicking properties of just the right amount of straw, the fine grained nile clays would crack and distort as they dried, so a certain amount of chopped straw was added. However, archaeologists have found numerous bricks in the region that are effectively just a bundle of straw daubed over with mud. That said, it might have been deliberate, because in the core of a wall, strength could be sacrificed in order to give better insulation. I suppose nobody knows. Anyway, the Pharaoh waxed exceedingly angry and said "Ye shall no more give the people straw to make brick, Let them go and gather it for their-selves, and the tally of the bricks, which they did make heretofore, Ye shall lay upon them.".
These were unfired bricks, we modern westerners were prone to dismiss them as "mud bricks" as if that made them inferior, but in fact there was nothing inferior about mud, or adobe, especially in a mostly dry climate.
Bricks used to build the ancient city of Jericho, ten thousand years ago, can be found today in as good a condition as when they were new. Their shape is similar to a small loaf of bread, but the size, well that's similar to the size we use today. It's not rocket science. A brick's size has to be so that a man can place it, repeatedly, all day, with one hand. Hence the jericho bricks are about 9"x 3" x 3", our modern ones are mostly 9" x 3" x 4".... Moving on, however, the firing of bricks began about 5,000 years ago, in Iraq.

The Ishtar Gate, built in the reign of Nebuchadnezzar 604-562 b.c. was one of the earliest great works in fired and glazed brick.(I love that name... my grandfather, when I was about four or five used to teach me silly rhymes "Nebuchadnezzar, king of the Jews, bought his wife a pair of shoes. When the shoes began to wear, Nebuchadnezzar began to swear!").... 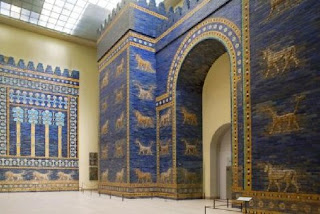 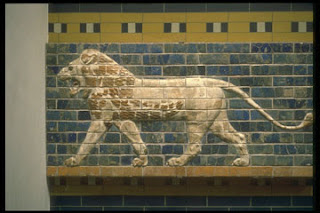 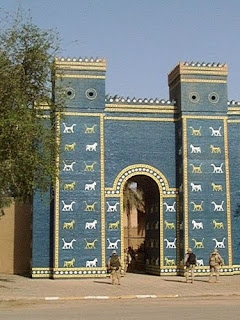 In Europe, buildings would tend to be made with that which is abundant. In areas of forest, timber houses were predominant, as they are still in many parts of Scandinavia and Russia., timber buildings, however, in cities were vulnerable to fire, and to attackers. So,  where stone was available the wealthier citizens built  with stone. But most countries have areas where there are deep beds of clay and sands, and stone is more costly, having to be transported in. These areas were where the buildings were most often made of brick. European brick-making was strongest in the Low Countries, (Flanders being the centre of the trade) and from the thirteenth century onward, brickmaking became an important part of their economies. Bricks were exported, (over 200,000 bricks were shipped from Ypres for work on the Tower of London in 1278) , but obviously, they were a heavy, and therefore expensive commodity, when shipped far from their site of manufacture, so it became more common for Flemish brick-making crews, whole families, to travel instead, to the customer's site, there to dig clay, mould bricks, and fire them.
They travelled all over europe, and many of them crossed the north sea to britain. Just to the east of where I live, the town of Kingston upon Hull (better known just as 'Hull') became Britain's first all-brick town, even its defensive walls were of brick. Just as Max said all the bricks were made on site. Hull sits at the northern shore of the Humber estuary, on a rich bed of secondary clay. There's nowhere nearby to quarry stone. 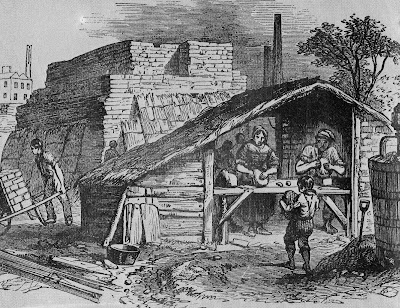 Soon enough, the knowledge of brickmaking became widespread. Most farms made bricks, often the source of the bricks was left to fill with water and to become a duckpond. These bricks were often rather soft, and underfired, fired in an open stack or "clamp" in which the material being fired formed its own kiln. As we see in Cruickshank's cartoon below. 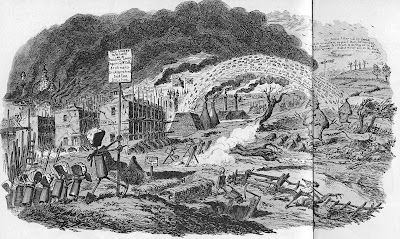 Cartoon by George Cruickshank, 1829, a protest against the farmlands of Hampstead, north of London, being devoured by the spread of the city, we see bricks bursting from the clamp-kilns, to spring up as new "jerry-built" housing, note the cracks in the walls of the unfinished housing.


Bricks in situ: London is built on a broad expanse of deep clay, and, just as this cartoon depicts, the housing of London was largely formed out of the ground it stood upon. The excavations became cellars. I found an old newspaper for an area of my hometown, advertising in about 1880, building plots close to the railway station saying "The site furnishes good clay for the brick-making, upon a foundation of good sandstone" .
During the 1800s the railways required vast numbers of bricks, one viaduct built in Manchester, over clay ground, has a length of over two miles, and used over fifty million bricks in its construction.
Here in Britain, roads were usually made of broken stone, of "Macadam" construction, (before tar-macadam), but in America, the Dutch settlers built many roads paved with brick. As early as1719 brick sidewalks were being laid in Philadelphia. 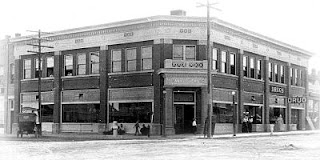 This is a Bank, made of Bricks, sent through the Post.
In 1916, Mr W.A Coltharp set out to build a bank in Vernal, Utah, and the bricks he chose were textured bricks made by the Salt Lake Pressed Brick Company, some 127 miles away. The cost of transporting those bricks would be tremendous, the wagon and rail journey would total 420 miles, and the quoted cost of transport was three times the cost of the bricks. But Mr Coltharp had a brainwave, USPS's parcel rate would be cheaper! The maximum parcel weight allowed was fifty pounds, so the brick company parcelled them up in lots of seven, and delivered them to the post-office. Chaos ensued. 80,000 bricks, fourty parcels a day. To say the postmaster and his workers were not impressed would be an understatement. Parcel offices along the way, and the railroads ,all complained bitterly to the Postmaster General of the time, who was so incensed that he rewrote the legislation, to the effect that henceforth, the maximum any one consignor could send to any one consignee in any one day would be 200 pounds in weight. In a letter announcing the amendment to the legislation, he noted that "it is not the intent of the United States Postal Service that buildings be shipped through the mail."

Yes, I know this post is somewhat disjointed. I was trying to curb my enthusiasm, as I haven't got time to write an entire book. So it was more about what to leave out. Roman tile-bricks, and Hampton Court  Palace, for instance...
Oh, very well then... Hampton Court was built for and partially designed by King Henry VIII of England, and it was constructed of red brick. The king had broken with tradition for grand residences, and used the brick in several innovative ways, shaped (rubbed) brick features, contrasting bricks etc. Suddenly brick was fashionable, not just functional. 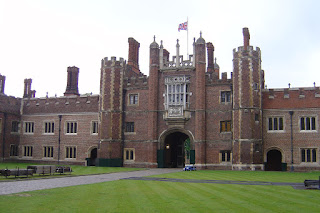