TapTapTap! Hello? Is this thing on?

Well, I should exploon. "Exploon? Is that a word?" No, it's a tryping error, don't worry about it, I usually attempt to edit out the slips of my wayward typing finger, but, hey, I should trust you to figure out what I'm trying to say.
Which is more than I can usually do.
I am, as I've previously mentioned, living a rootless nomadic existence, between my own cluttered abode, and my mother's house.
Since she died, the rest of my siblings can't seem to get their arses into gear to sort out what bits of furniture, property, whatever, that they wish to keep.
Nor is the house yet on the market. And it needs to remain insured, but the insurers require that, if they're to cover the contents, the house must not be unoccupied. So here I am.
Unlike mine, it has heating, lashings of hot water, a garden, oh, and a kitchen you can actually cook in.. Sniff. See? Sniff again. Bread. By mine own fair hands, bread, in the oven. Mmmm!
So here I am. But there's no internet.
Well, not quite true,  I'm connected to "linksys"... but, there's no knowing when it might get unplugged, so i decided to try an offline blog composting utility, windows livewriter. I used to use it, back in the old days, but blogger got so good at regular saves and rarely crashing that I forgot about composing offline.
Hence yesterday's test posts, of which one is still up.
Livewriter is not quite as intuitive as it used to be a few years back, but I'll persevere. What was flummoxing me, because I'm a boy, and therefore don't read the destructions, was the business of picture-posting.  I wasn't sure whether it had uploaded, and if so, to where? To a windows photohosting space? or to blogger? or? where?
Or, more troubling, was it fooling me, as has happened before when posting via Picasa, and not uploaded it at all, but  just displayed an image from 'localhost', i.e., my own computer.
It seems it worked okay, and I thank all those who responded. A few questions as to what the picture was. Obviously, that's just OBVIOUS!, it was a riverside scene, and it was of elephants hauling brightly illuminated barges.
Oh? what?
No?
You didn't get that?
No, you wouldn't, because I don't have such a picture. 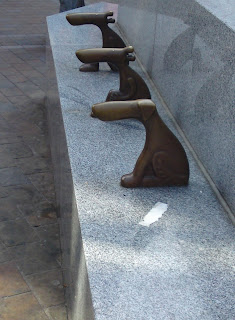 It was this one. Bronze dogs, as seat dividers on granite benches in the city centre. Each one is different, slightly. They morph, or mutate, or evolve, as you pass down the line. 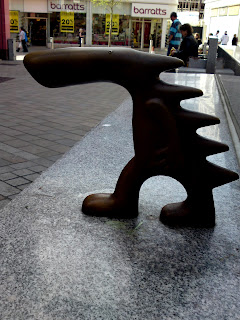 I was going to take more pics, but then the busker started singing, and people stopped to listen, and in no time, the seats were filled. 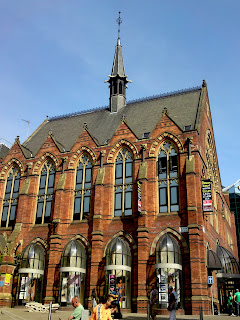 This building warrants a closer  look. It had a quite effective re-modelling as a  fashion retail outfit, I like the way the windows have been rendered into three-dimensional 'pods'. However, the roof detail is its most interesting feature. That little central spire's surrounding spikes are, if we look more closely,

Leaden dog's-heads. Reminds me of the detail on old Norwegian churches.

Dang!, If I'd known I was going to mention that, I'd have taken a better picture. 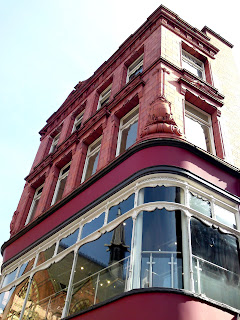 Always look up! That's what my old art tutor used to say about architecture, I did, way back, as a summer project, a photographic presentation of a walk through the city centre. Much has changed, much has gone since then. The building here has been messed-about at ground-floor level, just another boring glass frontage. But look up one floor to see the remnants of Edwardian elegance. Someone should get up there and strip the hundred years of accumulated paint from that woodwork, then set to, to restore the ground floor. Oh. And strip out that nasty, unsympathetic inner steel and glass barrier. 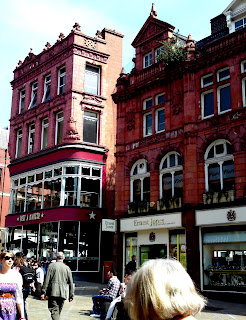 See what I mean? Over past years, the ground floors have been replaced with identikit cheap facades, and few of the passers-by ever notice the upper floors. I do, and get quite angry at the building owners who allow bushes to take root in the brickwork,  it's likely this building is part of a portfolio of 'investment properties', managed from another city, for owners who've never been there. 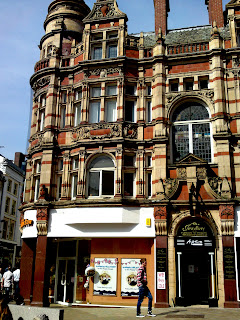 Last one: I sat outside this building, near to where I took this photo, for hours, way back in about 1973, and drew it in great detail. I've got the pic somewhere, still, I think.
Time for me to go swallow a headache remedy, to still the clanking in my skull.
Posted by soubriquet at 4:17 pm 15 comments:

Good day. This is my message for you. I am looking for stable relations.

That, I kid you not, was an email that today bypassed the usually excellent spam filter.
I love it.
I'm wondering if she'd care to clarify.
So far as I'm aware, most of my relatives could fairly be described as "stable", I could send her a few of those.
A couple are a bit wobbly.
Old age and hips in one, booze in another. Ooh yes... and the much older cousin who went loopy, and stayed loopy.

Or is she, perhaps, harbouring an unhealthily equine paraphilia?

My mystery spammer claims to be russian, yet goes by the name 'Maria Fox', and emails from a time zone closer to Ohio than Sverdlovsk.
Well, 'Maria', I wish you all the hay you can chomp
Posted by soubriquet at 2:57 pm No comments: