Why? I'm reposting this from  2007, because all of a sudden there's a cluster of hits via google and the question in the google searchbox?  "what is the poem freddy the rat perishes about?".
Look, kids, just read the damn poem. It is what it is, Freddy the Rat fights a Tarantula, who has been terrorising the creatures of the newsroom.  He seeks to stop the tyranny, and he is not afraid of the spider's venom as he has already eaten poisoned cheese. With his last act he saves his friends.
Is it an allegory of the underworld of New York in the 1920s? Maybe. The only person who could say for sure is the writer, and he died in 1937, so there's no point in asking him.
So. Poems? The one thing we can be sure of in a poem, is that our perception of it will not exactly mirror that of its writer. That's the whole story of art. It asks questions, leaves possibilities, and every time we read it, there's a slightly different story.
"Oh yeah!", you say "Well that's not what my teacher says, so who do you think you are to disagree?" Me? I'm a human, and thus as well qualified to have an opinion on Freddy the Rat as anyone else. And that's my advice to you. Read the poem, form an opinion. Stop asking others what it's about, ask yourself.
If you want to learn more, read about the writer, Don Marquis. read about the America he lived in, learn about the world outside his windows, learn about the people who read his column, and of course, read all the other stories he wrote.

The story of Freddy was not written in a vacuum, it was one of a whole series, written by Archie the cockroach, who was a re-incarnated free-verse poet, living in the bottom of Don Marquis' typewriter, and writing his poems and stories by jumping from key to key, in the night when no humans were around.

Of course, he could use no capital letters because he couldn't jump on the shift key simultaneously. Oh. Yes, sorry, I forgot that many of you have little or no idea what a typewriter is, let alone have used one.
A steampunk manually powered keyboard, all levers and fulcrums, no screen! stamping out letters on paper at a speed even the slowest crummiest printer would find laughable. 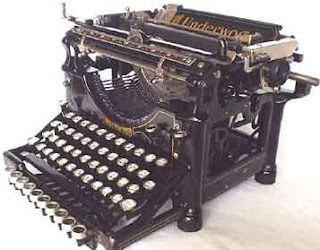 You can see one in a museum, I guess. Here's the poem. Oh. By the way, typewriters only had one font, until the nineteen seventies, when the IBM selectric came along.

The poem's displayed here in a type-like font

"Freddy the Rat Perishes"
By Don Marquis, Published in "archy and mehitabel," 1927
listen to me there have
been some doings here since last
i wrote there has been a battle
behind that rusty typewriter cover
in the corner
you remember freddy the rat well
freddy is no more but
he died game the other
day a stranger with a lot of
legs came into our
little circle a tough looking kid
he was with a bad eye
who are you said a thousand legs
if i bite you once
said the stranger you won t ask
again he he little poison tongue said
the thousand legs who gave you hydrophobia
i got it by biting myself said
the stranger i m bad keep away
from me where i step a weed dies
if i was to walk on your forehead it would
raise measles and if
you give me any lip i ll do it
they mixed it then
and the thousand legs succumbed
well we found out this fellow
was a tarantula he had come up from
south america in a bunch of bananas
for days he bossed us life
was not worth living he would stand in
the middle of the floor and taunt
us ha ha he would say where i
step a weed dies do
you want any of my game i was
raised on red pepper and blood i am
so hot if you scratch me i will light
like a match you better
dodge me when i m feeling mean and
i don t feel any other way i was nursed
on a tabasco bottle if i was to slap
your wrist in kindness you
would boil over like job and heaven
help you if i get angry give me
room i feel a wicked spell coming on
last night he made a break at freddy
the rat keep your distance
little one said freddy i m not
feeling well myself somebody poisoned some
cheese for me im as full of
death as a drug store i
feel that i am going to die anyhow
come on little torpedo don t stop
to visit and search then they
went at it and both are no more please
throw a late edition on the floor i want to
keep up with china we dropped freddy
off the fire escape into the alley with
military honors
archy 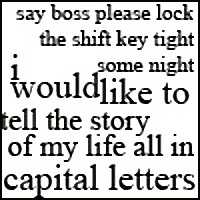 Posted by soubriquet at 6:46 pm