A Bed For the Maharajah

Nawab Muhammad Bahawal Khan Abbasi V of Bahawalpur, then 20 years old, and with an eye for the ladies, commissioned this rather fine bed from French  silversmiths Christofle, in 1882, it was delivered in 1886.. Nothing special, a load of rosewood, 640 pounds (290Kg) of pure silver, four life-sized statues of european maidens, mechanically driven to fan the Maharajah's brow, and whisk flies away from his slumbering form. Oh, and a mechanical music player to play him to his sleep with an air from Gounod's Faust. Bahawalpur is in what we now call Pakistan. Nobody seems to know where the bed is now.

"The design was sent to Christofle in Paris calling for a bed of "dark wood decorated with applied sterling with gilded parts, monograms and arms, ornamented with four life-size bronze figures (of naked females) painted in flesh colour with natural hair, movable eyes and arms, holding fans and horse tails".
Some 290kg of silver was needed to decorate the bed. The four naked figures were European, representing women of France, Spain, Italy and Greece, each with a different skin-tone and hair colour. Through ingenious mechanics linked to the mattress, the Nawab was able to set the figures in motion so that they fanned him while winking at him, against a 30-minute cycle of music from Gounod's Faust generated by a music box built into the bed." (Independent) 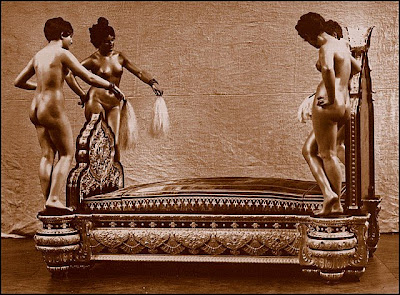 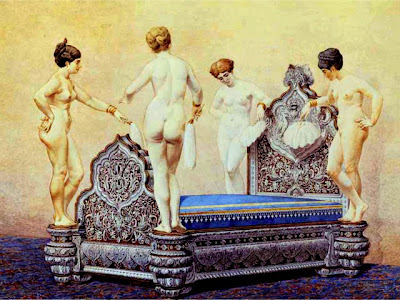 Adding, as it were, a few thoughts of mine own, this bed is a wondrous contrivance, a thing that might have in earlier times, been entrusted to Michelangelo... A blend of outrageous wealth and questionable taste.
Now here's my question. The young Nawab had unimagineably large heaps of wealth, the commission, by the way, at the time was top-secret, nobody in the firm was to know who it was they were making this for.
At twenty years old, a young Indian aristocrat, lord of all he surveyed, bought himself this. Which looks to me like a single bed, a bed for one only. Where the  occupant would listen to music and gaze up at his obediently fanning four nubile western women, paler skinned and differently featured to the women of his home country.  Whilst music played.
Well no. I shy away from the question...
The lad, surely, might have found real women?
Let me quote e.e.cummings.

Posted by soubriquet at 2:08 pm